(seen at the afternoon performance on 11th April 2022)

The second half of the monkey’s personal "cultural challenge weekend." This time breaking with its strongest taboo... opera. The very first time the monkey has attended a full opera by a major opera company in a recognised opera house.

In full disclosure, its only previous experiences (besides the occasional screechy “Nessun Dorma” on a TV talent show – and nobody could sleep through that racket) are: some Gilbert and Sullivan, which is operetta, practically musical theatre; an experimental “4.48 Psychosis” at the Lyric Hammersmith in 2018 and “Zoe The Opera” – a full length musical film adaptation of Glyndebourne Opera’s youth production by John Lunn and Stephen Plaice. It scored just 300,000 viewers on a Saturday night for Channel 4 and was never shown again (the monkey had recorded it to DVD, and treasures it). So, basically mostly stuff nobody has heard of, and not really the opera experience.

Of course the monkey has read “The Handmaid’s Tale”, watched the TV adaptation and attended the launch of the sequel book. Thus an opera for which it knew the story seemed an ideal place to try an art form it has never trusted itself with. The experienced opera-goers of its online discussion group felt it an odd place to begin, but the monkey jumped in with all paws and...

... surprised itself by enjoying the experience very much indeed.

It cannot and will not attempt to actually write an opinion as it would for any play or musical, as it has no frame of reference to say whether the performances were good or bad, the quality of the singing or orchestra as they should be for the art form. What it will do is look at the difference between the musical theatre it has loved for over 40 years and this very different but interesting world.

To begin, its major observation is that opera appears to be all about the voice. There’s a (evidently long-cultivated) purity to every note sung, like a musical theatre voice has been given prescription lenses which make the letters suddenly razor sharp again.

The second surprise is that the performers are almost static. In musical theatre, “park and bark” – standing in one place for the duration of your song – is frowned on. Here, it seems mandatory. If an opera performer attempted to be a “triple threat” (sing / dance / act) the monkey guesses they would get more than triple threats from the director.

This is where the voice kicks in. Despite being static, the monkey grew to love and empathise with Offred (Kate Lindsey), her husband Luke (John Findon) and mother (Susan Bickley). The sadness of Janine / Ofwarren (Rhian Lois), the brutality of Aunt Lydia (Emma Bell) and the odd conformity of The Commander (Robert Hayward) and wife Serena Joy (Avery Amereau) all arrived and were understood as well as if they were using their whole bodies and elaborate direction to communicate.

The real strangeness was how each used their voice to underline the key word or emotion they were feeling. The monkey quickly noticed how the voice (particularly female) went up to what it always thought of as “smoke alarm” pitch when they had something important to feel.

It was at that point it was glad of surtitles above the stage, as its ear wasn’t attuned to make out the words, though, rather like Shakespeare, as the production progressed it became easier.

There are considerable other parallels with Shakespeare in fact. The static staging – park and bark – is how Shakespeare was likely originally presented. Actors standing to deliver a line with only their voice and maybe outfit or small prop to communicate more.

Second, Shakespeare goes in for repetition to underline emotion. Partly to emphasise, partly to recap for both those who drifted in and out of his theatre in search of, well, anyway, and partly for the under-educated who made up a large part of his audience.

Opera appears to do the same. Lyrics (well, in this piece anyway) are not the clever and subtle word-play of musical theatre. They appear to be basic phrases, some sung numerous times. Quite disconcerting at first, but by the end the monkey really appreciated it. In rather a Japanese Zen way, the very complex plot of “The Handmaid’s Tale” was communicated perfectly clearly with considerably less effort than a musical theatre team would probably require.

Speaking of teams, the very wonderful chorus – every word sung clear and perfect – are deployed as the Greek Theatre might. There to fill the stage, provide broader moments of drama (a savage sequence in the second act particularly effective) and lend a little commentary and context as required.

Commentary on the music by Paul Ruders and Paul Bentley’s libretto must be limited by experience to note as stated that they told the story – with a different economy in Bentley’s case; and if the monkey still isn’t sure what an aria actually is, it does know that Kate Lindsey alone on stage singing of what she missed most was a stab to the heart up there with Eponine, Norma Desmond and Maria.

In conclusion, did the monkey almost piss its pants... er, find it better than “The Pirate of Penzance”... did it reject it or will it love it forever (“Pretty Woman”, movie and musical, paraphrased)?

The answer is, to its own surprise. Yes.

It isn’t ready yet for something not sung in English, nor without surtitles while its ear is being trained, but for certain it will seek out what it is told are the more accessible classics like “La Boheme” and “Tosca” at some point.

The only problem is, it may well not be at the London Coliseum.

As a tweet reaching over 45,000 people last month said, the monkey is sick of being discriminated against for being a single theatregoer. Sadly, despite this poster by the box office of the London Coliseum: 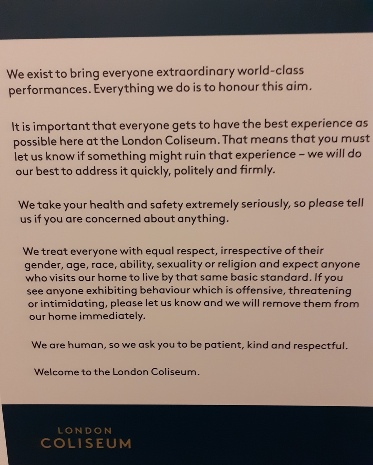 The ENO are one of the biggest and worst discriminators currently in the West End, and as the sign proves, sadly hypocrites.

Simply, there are pairs of slightly cheaper “restricted view” front stalls which the monkey wished to buy (it sat there for a few of the musicals the Coliseum hosts in summer). ENO don’t permit this, and the monkey was forced into paying a lot more just because it was single.

It mentioned this to the wonderful house manager and was told that it should write in, as the management are considering a change of policy but needed pressure put on them. Other staff are aware of and hate the policy, but it has not yet reached the desk of those who decide.

The monkey has sent a blistering email to the ENO marketing department today, pointing out that very often single ticket buyers do so as a result of some disability, present or past which leads them to lead a lifestyle requiring only single tickets. Excluding them is continuing disability discrimination, and a subsidised organisation has even less latitude to rely on the old “can’t sell a single ticket easily” excuse than a commercial producer who has no income other than box office.

In other words, the monkey now finds itself in the odd position of being an audience the ENO might want to develop, thinks has policies in place to do so... but has in fact totally alienated someone whom entire departments at ENO are apparently employed to reach. This one will run and run, and the monkey may update if anyone bothers to address the issue.

For the time being, though, the second half of its weekend can be declared a real success. The monkey has set ajar a door it had always considered closed and intends to explore further at some point.

For the moment, it’s 4 stars for “The Handmaid’s Tale” and truly glad it made the effort.