The Tragedy of Macbeth (Almeida Theatre)

(seen at the afternoon performance on 16th October 2021)

Yael Farber has no hesitation experimenting with arguably the best known of Bill the Quill’s works. Lines are added, cut or simply given to another character. Soutra Gilmour provides her with a bleak grey circular space split with moving screens and encroaching water, a “ghost light” adding both theatricality and a little ironic humour.

Within this eerie nether world Saoirse Ronan and James McArdle more than justify the asbestos gloves needed to handle the tickets for those lucky enough to own them.

In a fine moment McArdle reveals the dagger as an icon of darkest ambition and power incarnate, yet fails to appreciate its warning. There is no madness here, just reasoned insanity. It is thus even more brutal when defeat leaves him in control of everything and nothing. 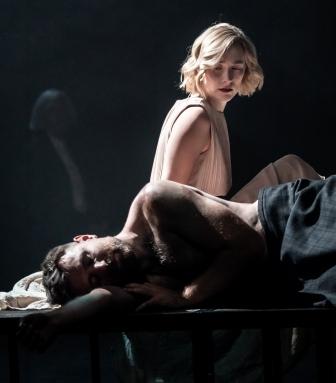 Ronan’s fervour for her champion breeds ruthless cunning, her youthful passion outweighing sounder judgement. The climax (in one of the most brutal scenes the monkey has ever seen on a stage) sees her confident, razor-sharp, brain pureed in a single facial expression and hand gesture.

Ross Anderson is a bloody and betrayed Banquo, stealing Macbeth’s confidence in act two’s perfectly staged opening scene. It is no surprise the depth of the bond between himself and young Fleance (Henry Meredith); a trust later given thoughtful review in a closing tableau.

As Duncan, William Gaunt is paternal yet omnipotent, his wheelchair a palace to friends, a war chariot to enemies. To dissent is death. But that Akiya Henry (Lady Macduff) had his protection, her key scene the perfect balance of maternal and personal fear, her later howling layering painful humanity on melancholy.

With Emily Terndrup and Kate Waters as movement and fight director respectively, there are moments of high drama, vicious attack, underlined torment and great tenderness further excavating emotions and motivations beyond the spoken word. Behind all, Tom Lane re-arranges a 1615 poem with music and makes “We’ll Meet Again” sound like a threat. 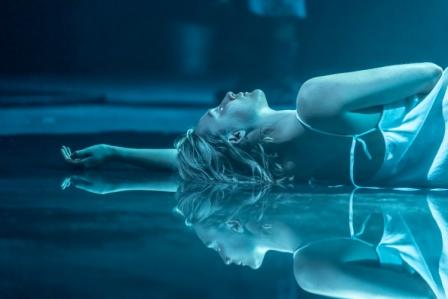 This is a very literal stab at exploring the effect of single-minded ambition on a power-crazed couple, a reading unique and highly memorable in all respects. Shakespeare at the Almeida is invariably a sound investment of time and money. This is no exception.

Photo credit: Marc Brenner, used by kind permission of the Almeida Theatre. These photographs must not be copied or shared for any purpose.