(seen at the afternoon performance on 3rd October 2021)

Young Sholem Asch’s debut play contains a passionate kiss between two women. His wife assisted greatly with the emotional research needed to make it both exciting and credible. His Warsaw literary mentors are shocked, but cousin Lemml – newly arrived in town from an unsophisticated country village - loves instantly his first taste of theatre and insists the script be staged.

This is 1907, Anti-Semitism may be rising, but the audience knows a revolutionary play when they see one. For the next 16 years the play “God of Vengeance” (“Got fun Nekome” in its original Yiddish) is acclaimed across Europe from Moscow to Berlin and thence to New York. An English translation opens at Provincetown Playhouse transferring to Broadway in 1923... where the actors are promptly arrested for obscenity.

The construct is inspired. Lemml (Finbar Lynch in Oscar-winning class) is our constant guide, keeper of the Asch flame even as it flickers in the winds of persecution and cowardice. 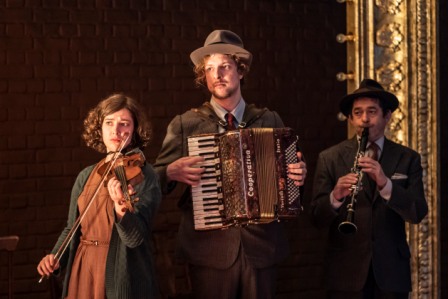 The actors shift character as required, sometimes different people at different ages, others from police officer to rabbi at the change of a tunic. Always there is shadow, always there is the joy of bringing memorable theatre to new audiences, undercurrents of unspoken and unspeakable sexuality, the will to celebrate what persecuted minorities can do and will do despite almost insurmountable odds. 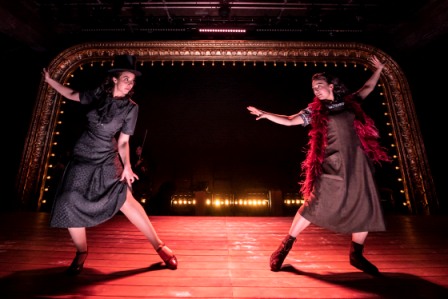 Alexandra Silber (left) and Molly Osborne are the young women at the eye of the storm. Shifting with sensational ease from Eastern European actors to Catskill Resort flappers, theirs is a chemistry of trust, timing, and beautiful song in scenes together, simplicity and deep characterisation apart.

Silber’s work with Joseph Timms in the opening scenes is particularly strong, both actors building the columns on which the entire play stands firm.

Vogel’s writing and construct flow with uninhibited lyricism. Tal Yarden provides projections behind (and below, for those in the front row) to locate and sometimes translate the action - adding immeasurably to the atmosphere when words are allowed to flood the stage.

The final glorious release is as fine a coup-de-theatre as any anybody will ever see, director Rebecca Taichman proving that no more than Riccardo Hernanez’s low raised platform, proscenium arch and costume rail are required to reduce audiences to weeping prayer.

The Menier Chocolate Factory has always had a reputation for strong work. That this play for some reason was missed or passed over by other theatres proves just how strong their artistic policy and nerve are.

A play which connects racial and emotional persecution, discusses individual, national and global freedoms of expression in all forms and does so in language and culture unfamiliar to many yet educating rapidly so it feels instantly familiar is a radical and brave choice. They are rewarded with the finest of artistic triumphs.

Since the Trafalgar Studio 2 is no more, there is likely no space which could give “Indecent” the West End production it so richly deserves. To see it from the front row, actors an inch away, grains of time moving and shifting underfoot as they pass is an unforgettable experience. Anybody who misses it will surely regret it.