(seen at the afternoon performance on 16th November 2021)

In an age when, according to Channel 5 documentaries, every young couple is selling their private lives on webcams and “OnlyFans,” this tale of a millionaire paying a lounge singer’s wife a million dollars for one night could seem dated. In fact, it’s a terrific idea for a musical...

... and this appears very much a “first draft” for one.

Called in the programme a “chamber piece” (musical theatre-speak for a small cast and no big dance routines), Dylan Schlosberg (music) and Michael Conley (book and lyrics) certainly plough their own furrow with a very different take on how musical theatre should be constructed.

What would be expected is a show where the central characters sing their thoughts and emotions as money, need and temptation mix a lethal house cocktail. Opportunities for husband and wife to explore their feelings in solos and duets. For us to learn just why a successful businessman is cold enough to make the offer. For meetings and partings to be explored through music.

Instead, it seems that barring the act one finale, songs are a background to the spoken action. For most of the time it is left to lounge singer Annie (Jacqueline Dankworth) to stand on her podium and allow soon-to-be cuckolded Jonny (Norman Bowman) and rising talent Heidi (Eve De Leon Allen) to perform to the crowd too. Harmless enough and everybody gets a turn at the microphone, but not exactly integrating the songs in a way which drives the plot.

Annie gets a pretty good side-story about the cruelties of the American medical system – leading to the expected resolution. Given her prominence on the stage, it rather diminishes what should be the central triangle.

Larry (Ako Mitchell) meets “by accident” Rebecca and Jonny – 7 years married, 10 together. The first half is the lead-up to that night, the second the aftermath. Aside from closing the first half almost as expected, yet oddly missing the depth it should command, the writers skirt it all. Larry is apparently a well-known musician as well as tycoon, so is given chances to perform his hits rather than explain his back-story in expected song.

The same goes for the couple. Her songs are awkwardly shoe-horned into the story instead of flowing from her character to explain herself. There’s space for at least two upbeat rock numbers as well as a couple of internal monologues with matching themes.

Her husband at least gets songs fitting his character, but again these are delivered as additions rather than continuations of the plot.

The good news is that the performances are universally strong. Lizzy Connolly is way under-priced at a million dollars given her sweetness and determination. Bowman avoids relegation to mere lounge lizard minstrel with a heartening love for his aspiring student daughter “Kit Kat.”

Ako Mitchell's Larry is coated in some sort of emotional Teflon, the sleaze from his plan failing to really stick due to an underlying and occasionally seen frailty in his resolve. 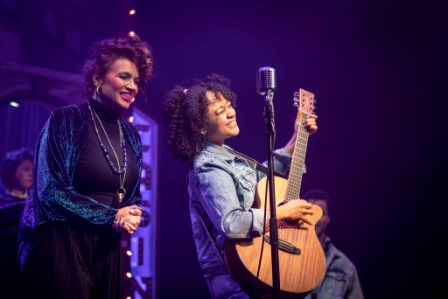 As our hostess, Jacqueline Dankworth (above, left) knows how to work a room and gain our sympathy. Likewise sidekick Eve De Leon Allen (right) elicits enough loyalty to have audiences searching for her albums “Heidi Hi” and “Heidi Hi, Again.”

An able musician, as are Connor Going with a neat busking turn, Olivia Thompson who doubles as a helpful croupier with success, and Liam McCloud and George Readshaw on drums and bass guitar respectively.

Director Charlotte Westenra ensures that what material she has is always from a female perspective and never allows the pace to drop or focus to shift – possibly why the lack of integrated score is felt so often.

Anna Kelsey gives us a functional dysfunctional Atlantic City Casino room and even less functional apartment rollaway bed. She really scores with the costumes, the sadness of Rebecca moving from figure-loving wear to shameful concealing jeans a thoughtful touch. A note too for Rachel McDonald as hair consultant – Ms Connolly’s locks bring back memories of the era.

There’s enormous potential here. The book is nearly right, and it was obvious to the monkey exactly where the right songs should go. Even fragments of dialogue which could form the lyric. Given considerable time and development, the creative team should be certain of a huge hit once they have moulded the material.

For now it’s a chance to see an embryonic show taking shape, and to enjoy some rather good performances up close before they are swallowed by a far larger commercial home.