(seen at the afternoon performance on 6th October 2020)

There’s a long sequence near the beginning of this show during which Jamie lists all the Jewish women he has dated. The monkey is considering a re-write to list all the actors it has seen in various productions of “The Last Five Years.”

Cathy explores her marriage breakdown from end of the relationship to its beginning, Jamie from meeting to final spilt. The songs alternate, the wedding is in the middle of the show and those who don’t catch the concept from the start are in for a long 90 minutes.

Cynicism over, this was the first show the monkey didn’t see when the axe fell in March, and its first show back now a few brave producers like Katy Lipson and venues like Southwark Playhouse seize the chance.

It's a worthwhile exercise. The twist here is that both characters are played incredibly young – the ages Brown had in mind originally, according to the producer. This provides the show with a much-needed new fascination. 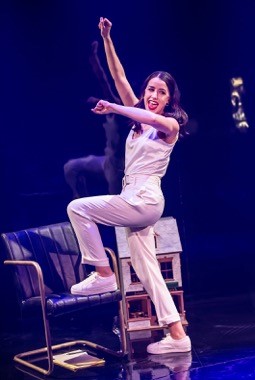 Cathy (Molly Lynch) is all wide-eyed naivety as her first really serious relationship explodes, all romantic ideas shattered by the raw energy of a boy she misread utterly.

Jamie (Oli Higginson) may have an ambition women find attractive, but Higginson finds in him a selfish teenager – easily one of the least mature and most self-absorbed “Jamie” portrayals the monkey has seen.

So loutish is he, the monkey caught him using Cathy’s borrowed “Daisy Mae” sweater to mop wine (that he’d spilled earlier) off the stage floor when he thought nobody was looking. A detail worth including in the show, or an actor who may need therapy to find his own personality again at the end of the run (or, if that is his normal personality, needs therapy and psychoactive drugs anyway)?

Director Jonathan O’Boyle exercises his usual gift for theatrical clarity, leaving us in no doubt as to why the relationship failed. Other productions suggest either an unsatisfying drifting apart or clashing of values / infidelity / mismatched career progress as the basis of the drama. This time, we know that neither person has a clue how relationships work. They cannot begin to communicate on the most intimate level, simply because they truly don’t know how or what is required.

The result is to remove some of the drama between the pair, focussing instead on the mental processes of each individual. We are thus left to deduce the toxicity of the actual relationship at the conclusion of each song revelation. Certainly a new approach, but not quite always yielding the desired result. At points where the story requires intimacy and interplay, it is difficult to trust the strength of their bond.

Lee Newby puts the audience on three sides of the actors, with a piano on a revolve and a chair at each corner. It creates some awkward angles – one a rather unpleasant tableau if viewed from the wrong seat – but a wonderful little prop almost makes up for it. 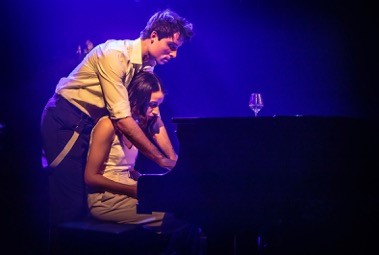 As actor / musicians Lynch and Higginson have some lovely moments at the piano, Lynch also adding drama by chiming her marriage away. Choreographer Sam Spencer-Lane gives her a couple of personality moments too, Higginson getting more of an opportunity to simply dominate the space as he desires.

As singers, both need to be pro-active in the defence of their voices. It was very audible just how tired both got towards the end of the show. Vocal rest, singing tuition, re-reading theatre school notes, whatever it takes to protect themselves is the monkey prescription. These are two voices too valuable to damage.

It isn’t a definitive version of the show, there’s an inevitability rather than dramatic implosion most other productions suggest. Still, it’s a thoughtful and unique interpretation performed with considerable skill.

As the monkey stated, first trip to the theatre under the “new” conditions. Southwark Playhouse deserve the highest praise for trying, but really, that word does rather sum up the entire experience, this free-ranging simian found.

First, for those visiting Southwark Playhouse at least, monkey advice is arrive early. The line outside (they have a wet-weather plan) is long and slow-moving. The greeting at the end is warm enough to make up for it, but once past that gate it’s the usual Boris-porridge of good intentions against human nature.

Forget social distancing. For a kick off, glasses-wearers in particular will find the steam-up from masks react badly with the dimly lit corridors and auditorium to make it a stumble around. Being told to distance from other customers is fine, but others won’t or can’t (there isn’t much space) and there isn’t really time for it either if the show is to start approximately on time. So, you are going to be very close in the corridors.

If you are on the “wrong” side of the auditorium for the door to the toilets, you will trek around all 3 sides of the stage, spreading virus to the front row as you go. Reaching the toilet foyer, line up like school-children and a few cubicles (unisex – no modesty here) are open and you can use them when there are fewer than 3 in line. Just hope the person before you is house-trained.

Watching the show masked isn’t comfortable, and if you are single there is a vast Perspex panel either side of you. If you have even the same very average shoulder width as the monkey, you will be clanging off them - any broader, and contortion is required.

For those in side seats, the actors are sometimes visible, sometimes a bit spectral behind several panels. If you are single and can’t get a front row, front-on view, manage your expectations is the monkey advice.

Finally, if you want to make a quick exit, “high numbers” side front row leave first – the compensation for the view.

On the plus side, the staff try so hard, and at least theatres are open. And for that, we are thankful.