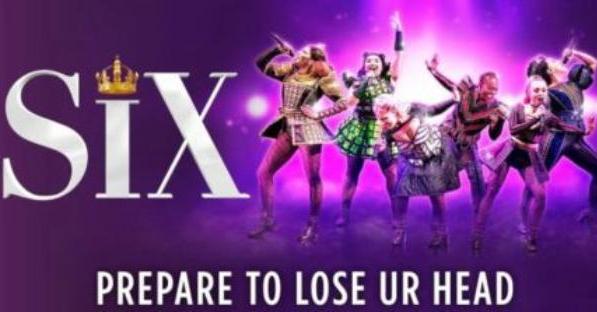 From Tudor Queens to Pop Princesses, the six wives of Henry VIII take to the mic to tell their tales, remixing five hundred years of historical heartbreak into a 75-minute celebration of 21st century girl power. These Queens may have green sleeves but their lipstick is rebellious red.

SIX has become a global phenomenon since its early days as a student production in a 100-seat room at Sweet Venue during the 2017 Edinburgh Fringe Festival. As the pandemic struck, SIX was playing to sold out houses in London’s West End, across the UK and Australia, and had its opening night in New York on Thursday March 12 cancelled when the New York Governor shut down Broadway three hours before the show was due to open.

SIX was nominated for five Olivier Awards including Best New Musical. It won the BBC Radio 2 Audience Award for Best Musical at the Whatsonstage Awards, performed on the results show of ‘Britain’s Got Talent’ and has performed annually in front of thousands at West End Live in Trafalgar Square. 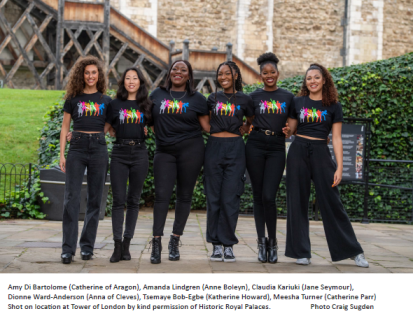 (seen at the afternoon performance on 7th March 2020 at the Arts Theatre, London)

On the day before “International Women’s Day,” a quirk of scheduling had the monkey seeing first, at 2.30pm the outstanding “Far Away” by Caryl Churchill at the Donmar Warehouse. With that over by 3.20pm, it had plenty of time to catch another celebration of female creativity just down the road (that it had been itching to see for months) – “Six” at the Arts Theatre at 4pm. It heartily recommends this double-bill.

It’s about the woman, not Henry VIII. Starting as a popularity contest (and, frankly, a pointless one as Anne Boleyn well knows) it becomes very quickly not just a string of biographical songs, but a highly accessible dissection of the role of women at court of that time... and just how closely many female lives are lead today.

Every lady is individual, and the programme breaks down the song styles as each Queen parallels a modern recording artiste or two. This isn’t a string of pastiches, though. The show is far too brilliant for that. The music is a jumping-off point for personalities to emerge, and for the ladies to blend as they compare notes.

Zara MacIntosh (Catherine of Aragon) is bright and strong enough not to take things lying down. As Courtney Bowman’s Anne Boleyn usurps her place, it isn’t without a fight. Bowman keeps the running joke funny, and her wise instruction is hilarious.

Natalie Paris (Jane Seymour) is a tragic figure with downbeat comic timing and stage presence to accept the teasing coming her way. Alexia McIntosh (Anna of Cleves) is central to the longest segment of the show – a delicious satire and one of the best songs, following, too.

Sophie Issacs (Katherine Howard) is careful not to unbalance the show with her own cheeky individuality and dazzling moment in the spotlight. It is left to Hana Stewart (Catherine Parr) to return us to solid ground, which she does to lead the show to a fun and deeply thoughtful conclusion.

There isn’t a dull moment visually, audibly or intellectually. Best of all, it’s young and British. Sure, musical theatre creation is alchemy, and lightning rarely strikes more than once or twice for even the very best composing teams, this is one of those rare million-volt hits. See it.

Six at the Lyric at beginning of June - I sat in D11 in the stalls - almost dead centre and with the show being like a pop concert it was good to be at the front. Amazing amounts of leg room (not sure if this is standard or they’ve adjusted for social distancing) so I was really comfy. Not much of a rake but not needed being so close to the stage. A great spot and I felt really involved.

Loved the show too - brilliantly clever lyrics, great performances from all six of the cast and I had several of the songs stuck in my head for days after which is always a good sign!

(from the Arts Theatre, London)

I think everything has already been said about the show, it's great fun (and educational too!).

I sat in Stalls A9. This is the second row for this particular show, and 9 is relatively central. So an amazing view for the most part, with the six queens making direct eye contact regularly. However, I think it was this seat that they seemed to have focussed all the back of stage lighting on, I was regularly absolutely blinded! Also expect to be deafened, both from the music on stage, and from the full audience behind you!

I would say the "gig" nature of this show means it may be more important than usual to choose a row as far forward as possible, in order to feel fully involved, and to take in the quite stunning concert-like light show (even if it did dazzle me at times).

Special note for the last song of the show, which they invite/urge the audience to get out their cameraphones and film it. They seem to have developed a tradition of grabbing one or two lucky person's phone and taking it around the stage for some extreme closeups before returning it. The lucky phones on my show came from A10 and A11 next to me so sit central BB or A if you want a chance of that.

Let’s leap straight in: We all know 'Six' is the story of the Six Wives of Henry VIII. And the premise of the show is simple: Who suffered the most? Cue the only way to decide… a sing-off!

Each of the Queens takes centre stage, telling their story in song. And the show gleefully raids a range of musical styles: Beyonce, Adele, Lily Allen, Rhianna, Eurodisco/Krautrock, Ariana Grande and Alicia Keys are drawn upon for the queen’s individual and group numbers.

As you can see from the above, this is no ordinary musical, it is a mix between a musical and a gig. And It never lets up the pace.

All Six Queens were wonderful, but I have to mention Millie O’Connell as Anne Boleyn - all attitude and sass, but allowing vulnerability to bubble under the comedy. And our Jane Seymour that night was Grace Mouat - her rendition of the beautiful ballad ‘Heart of Stone’ was tender, touching and emotional. But the song you’ll find yourself singing is Katherine Howard’s Ariana Grande inspired ‘All You Wanna Do’, belted out with controlled power by Aimie Atkinson. How she changed the emotion in each chorus was riveting.

I must also praise the all-female band, who move from musical style to style effortlessly, driving the show forward.

And ‘Six’ revived my interest in the history of the period! I’d forgotten quite how remarkable sixth wife, Catherine Parr’s achievements were. And ‘Six’ neatly dissected the normal portrayal of the aforementioned Kathryn (how she spelled it in her only surviving letter) for a more naive young woman. When I got home that evening I found myself delving into their individual histories and want to learn more.

I loved this show. And so did the audience (quite a few pretty young kids: personally I question the suitability of ‘Six’ for such a young audience). I’m not typically a pop fan (rock, folk and increasingly country are more my usual cup of tea), but I bought the cast album before leaving the theatre. 75 minutes flew by, I could easily have sat down and enjoyed it all over again.

What I would say is; go in with an open mind. ‘Six’ deals with it’s subject matter in a very different way. That might not be to all tastes, but sit back and let the Queens show you they are very, very much more than one word each in the old rhyme.

Seat Review: Stalls, seats J1 and J2
These seats are sold as ‘restricted view’. The only way anything would be lost was if it appeared in the top right-hand corner of the stage. They’re nicely close to the front, as said previously the sightline is not affected one iota by the pillar. They are comfortable with sufficient leg room. If you are offered these at reduced prices, snap them up.

C4 in the Circle. Good view but very tight on leg room.

The choreography is superb, 75 minutes of pure energy.

There really is very little substance to this but it's a lot of fun and is sure to run for some time.

Leave your brain at the box office and enjoy.

The Sing Along is ideally for the mega-fan. The sort of person that went, loved it, bought the soundtrack before leaving the theatre, played it constantly and gets very odd looks singing it when riding their motorbike... ahem.

Be warned, if you don't know the words, you're not getting any help. I wondered if they would be back-projected or something. Nope, you're on your own.

Not that it was a problem for the audience! From the first number, how many were word perfect was amazing. First big giggle is (if you know the opening number) when Jane Seymour says she is "the only one he truly loved" and the whole audience went - quite loudly - "RUDE!" and burst into laughter after! "Woof" during 'Get Down' gets a similar treatment!

The audience really gets into it's stride for "Don't Lose Your Head". But every number is accompanied in perfect time.

For anyone worried normal theatre decorum goes out the window, don't worry. Yes, the idea is you sing along. But still no photos (except for the lucky pair who get their phones taken on stage during the 'MegaSIX' at the end), everyone is politely asked to remain seated until said MegaSIX.

Don't rush away after, some of the audience's costumes are quite wonderful - I just had to congratulate one girl whose Anne Boleyn outfit did the onstage original justice.

You can go as a first time Queen and have fun (I overheard two women who had never been before and they loved it), but to get the most of it, go to a 'normal' show, get the soundtrack, learn the words (they're now available on the site), come back and join in!

Seat Review: Stalls J17 and J18
J18 has a (slightly) restricted view behind a pillar. For Six, when the Queens are lined up at the start, you lose Katherine of Aragon. For most of the time this isn't an issue, as the bulk of the action is centre stage. J17 has no such issues. Both great value at a reduced price, but go for J1 and J2 if available.

Tuesday to Thursday "off peak" dates:

Friday to Sunday and "peak" dates:

RUSH TICKETS: App Todaytix are offering £25 "Rush tickets," located at venue discretion, for all performances. Released for the performance on that day, first-come, first-served. Download the App from Todaytix, unlock the "Rush Ticketing" feature by sharing on Facebook or Twitter, and that will allow you to buy tickets.