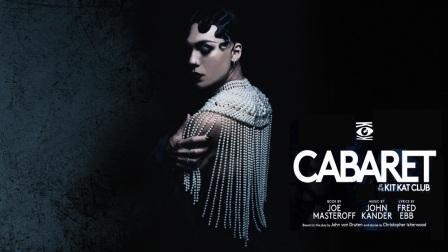 In a time when the world is changing forever, there is one place where everyone can be free…..welcome to the Kit Kat Club. This is Berlin. Relax. Loosen up. Be yourself.

One of the most successful musicals of all time, CABARET features the songs Wilkommen, Don’t Tell Mama, Mein Herr, Maybe This Time, Money and the title number. It has music by John Kander, lyrics by Fred Ebb, book by Joe Masteroff. Based on the play by John Van Druten and stories by Christopher Isherwood.

The Kit Kat Club has taken over the Playhouse Theatre while it has been standing empty, transforming one of London’s most famous theatres with in-the-round auditorium and reimagined spaces. The marginalised have staked a claim, the artists have taken over, filled their container and found their community. It’s 1930s Berlin. It’s 2020s London. It’s Then, it’s Now. Who knows how long it will reside here. For now, we’re enjoying the party. The party at the end of the world.

Before the show, guests are invited to enjoy and explore the Kit Kat Club with drinks, dining and pre-show entertainment all on offer. When booking, guests will receive a 'club entry time' to allow enough time to take in the world of the Kit Kat Club before the show starts. But of course, the show really starts when you first join us in the club……

The most disappointing version of cabaret I've ever seen. I can understand why they made such a big deal of turning the theatre into the Kit Kat club - it was obviously to detract from the lacklustre production. The leads were OK, not good, not bad, just OK. The ticket price must be for the various actors wandering around to try and set the scene.

Fabulous. I enjoyed every second of it. It certainly lives up to the hype. The cast are excellent, the two leads make it their own. I wish I could go back again. Best show I have seen in the West End for quite a while.

"B 5 and 6: (Table seats) - fabulous view of the stage and the surroundings. The stalls performance is in the round and all around so even if someone tall is sitting the front row, the view is excellent and it's great to feel part of the performance. Plenty of legroom and seats are reasonably comfortable...the show lasts nearly 3 hours. Aim to get there 30 mins or so before curtain up to soak up the atmosphere...free drinks (glass of schnapps, bottle of beer or water) are given to everyone on arrival...problem is with so many people drinking the queue for the loos in the interval are very long! No food served at this table which, from what we saw, probably doesn't warrant the extra cost. If your budget allows you to purchase these seats, you will not be disappointed."
_________________________________________________________

Last night, I was very fortunate to see Cabaret, buying a ticket for the upper circle the previous day for £30. I had been watching the website, and had seen returns appear (presumably due to Covid) - and even the £250 tickets were taken within minutes. When a block of £30 tickets appeared, I reserved one immediately, and chose upper circle C23 because, of the ones available, it was least surrounded by other seats (Covid precaution). It turned out to be probably one of the worst seats in the house for visibility, but still relatively good value - relative, that is, to a whopping £250 for a top price ticket.

Looking at the ATG website, it appears that the upper circle is not being released until close to performances (either that or every upper circle seat has been bought up to September).SPOILER ALERT: The stage is around 600mm high. It has a small central circular platform surrounded by three rings. The platform and inner ring rise, by around 1.5m and 600mm respectively, and some of the key action takes place on the platform. It is possible that the heads of people on the platform might not be visible from the rear of the existing dress circle. The middle ring rotates, and much of the ensemble performance takes place on this ring - so it is visible to both ends of the audience - and this also overcomes some of the obstructed visibility. SPOILER ENDS.

From wandering around in the interval, it seemed that most seats on the 'front side' provided good visibility, apart from upper circle C1 and 23 (see below) and the extreme seats either side on the dress circle; these were slightly obstructed by the galleries for the band, which appeared to be widened from original circle boxes. I did not get to the 'rear side', but the visibility looked good (it should be, as this is newly constructed!). Overall, I thought that the staging provided good visibility of the action, and took into account the limitations of the venue.

General Comments on the Upper Circle:
The upper circle has four rows, which have been built over the original upper circle. The rake is extremely steep, with the feet of one row at the level of the shoulders of the row in front. The stage is relatively close, but you are looking down at an angle of 45 degrees. Each row has a solid wall in front, but these are definitely not seats for people with vertigo. The leg room is adequate, and you can (just) get get past people to you seat.

Row C is level with the lighting truss, and row D is above it, but this is not obtrusive as you are looking down so steeply at the stage. Row C extends out further than the other rows, and the view from the extreme seats C1 and C23 is partially obstructed by lighting. The other seats have a generally good view of the stage - albeit from above. Some short scenes take place partically under the galleries at the sides of the stage that house the band, which might not be visible from seats towards the sides (choose lower numbered seats if you can).

Review of Upper Circle seat C23 (also applies to C1, as the lighting is symmetrical):
This seat is further to the side than the other rows in the upper circle, and the view of the stage is partially obstructed by a lighting 'ladder'. However, you can see almost all of the action by looking through or around it - and much of the action moves around the stage for both sides of the audience. However, you are looking down steeply on the stage, and the upper circle is not suitable for people with vertigo.

Because of the steep rake, there is a wall in front of each row (padded to lean on), with just enough room to get past another audience member to your seat. Leg room was adequate for me (I am 175cm).

I sat in the stalls seat F23. This proved to be an excellent seat, a perfect view of the stage, well raked, better than row E - which had table seats directly in front - and actual legroom, which was a real treat. As I get older my tolerance of folding into a tiny seat has got even less and this was roomy and comfortable.

There was a shelf in front to put drinks on so, unless you are desperate for the table experience, I really don’t feel it’s worth paying almost three times the price for sitting that little bit closer.

I also enjoyed being near the aisle where the cast came on in full character from the moment they entered the auditorium each time. Highly recommended. Being in the stalls is so immersive that I wouldn’t want to sit elsewhere for this production.

Absolutely loved the show. It’s a favourite of mine anyway, and this was superbly acted and sung. It’s surprisingly minimalist - unless you account for the fact that the whole theatre is in effect the set.

A justified hot ticket and well worth the trip.

Runs 2 hours 45 minutes approximately, with 1 interval. Before the performance there is an extra 1 hour pre-show.

All details are provisional and subject to change.

DAILY LOTTERY: SIX £25 seats - including at a cabaret table are available via app Todaytix at https://www.todaytix.com/london/shows/23939-cabaret. Entries open at 0.01am on the day of the show, with the draw closing 4 hours before performance time. Winners are contacted by email and have 30 minutes to accept their tickets. Maximum 2 tickets per winner.