(seen at the afternoon performance on 30th December 2021).

Sometimes this wretched virus has its advantages. Forced into pre-operative isolation the monkey had to give up its treasured ticket which had been bought in 2019 and held over from 2020. Luckily, the kindness of ATG allowed it to reschedule to a midweek matinee in Christmas week itself... making it lucky enough to witness something very, very special indeed...

With positive tests felling cast and crew all over the industry, it was watching with trepidation its phone for any sign of cancellation – particularly as home tree to Wimbledon is a lengthy and fairly expensive journey. No text arrived, so off it trotted.

A couple of signs in the foyer announced three leading characters were being played by other people, but only when the panto’s director Ian Talbot took to the stage to address us did the full power of panto magic emerge.

We were informed that while two ensemble members were able to move up – Charlotte Ross-Gower to Alice Fitzwarren, Callum Mann to Sarah the Cook – that still left Queen Rat. Apparently, Rachel Spry had been home enjoying left-over turkey sandwiches (or not) at 11am on 28th December. By 2pm she was in full Rat mode, and had been for the last 4 shows.

By 11.30am on the morning of the 30th, that very day, the show also found itself a sound mixing desk operator down. By pure luck, this year’s star Shane Richie happened to know “Andy” who lived locally. The brave man was at the desk two hours later, though it was ungallantly suggested that as he had two very young children at home, he probably enjoyed the break.

And so, as Ian Talbot then declared, “on with the show”: and it was a proper cracker.

The monkey had already lavished highest praise on Peter Duncan and Ian Talbot’s filmed “Cinderella” in December. To have a second Talbot panto is a reminder that Talbot and Wimbledon Panto go together like Morecambe and Wise, Laurel and Hardy, and every other great comedy pairing.

Vanquishing all memory of the disastrous 2015 Jarred Christmas affair, this is part 2017 Alan McHugh London Palladium Olivier Award Winning script and sets, and part Talbot traditional panto knowledge of the old and glorious routines beloved annual visitors. Mix these with an all-star cast and it’s a smash of a two hours.

Shane Richie gets the title role, and enough double-entendres to keep the adults roaring and the kids guessing. A real leader of his company (even as he admits, tongue firmly in affectionate cheek, that he was turning up each day and not recognising anyone) there is good reason the production’s marketing focussed on him.

With Hiba Elchikhe off, the aforementioned Charlotte Ross-Gower stepped in as Richie’s love interest Alice Fitzwarren. Joking at the final curtain that he had underpants older than her, there’s all the more reason to give the highest acclaim and respect to this young lady’s talents. Comic timing, dance ability and a lovely act two opening “In The Navy” should ensure (if Crossroads Pantomimes have any sense at all) that next year’s Wimbledon role of Snow White is hers for the asking.

Likewise, justice can only be served if fellow sudden promotion Callum Mann is offered professional development for his last-minute turn as Sarah the Cook. Pantomime Dames study for years, Mr Mann has a few commercials, a training show and a bit-part on TV before getting thrown in the deepest end possible covering for a Dame who, well, has bloomers older than his parents and has forgotten more about being one than he may ever know.

And yet, the brave youngster did it. In style. One of the trickiest tongue-twisting routines in pantomime was handled as an everyday occurrence, and the rest was simply natural to this emerging future member of the sisterhood.

That he held his own against one of the best in the business, Peter Piper as Captain Cockles, is to his credit. Piper is Panto. Confident, daring, hilarious without saying a word and even funnier if he does, mixing him with Richie is genius.

Spoiling it for everybody except the audience, Rachel Spry (rarely with script in hand) had the juniors in the house wound up at her every appearance. Probably welcoming the unexpected opportunity to vent a little post-festive malice (what went on around her Christmas table?) “ratty” would sum her up perfectly. Again, next year’s Wicked Step-mother should be hers by right after this.

The perfect counter-balance was always reliable Shona White as Spirit of Bow Bells. A vision in pink and bright firework entrances, her watchful eye and melodic voice charmed old and young alike with perfect fairy dust. 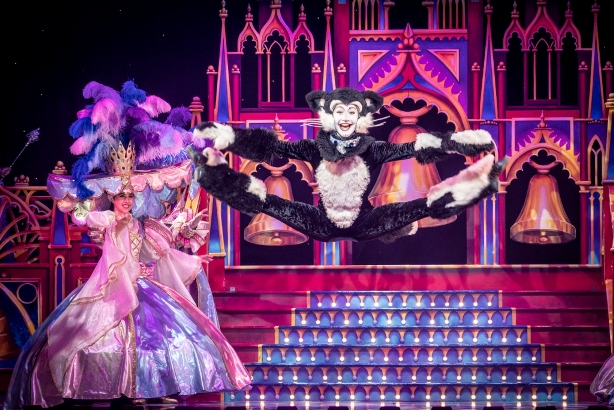 Equally expressive, Briana Craig as Kitty Cat got some lovely moments including a sharp “Squid Games” parody in which her job was well done.

Particular fuss must be made of Lucy Campbell, Charlie Waddell and Edwin Cheng, the three remaining ensemble members. Doing the work of eight (yes, really, a show of 18 being done by just 10!) the trio delivered every dance number and other ensemble duty with energy and precise execution, not to mention Cheng’s break-dancing break and Campbell and Waddell’s impeccable timing in Aaron Renfree’s stage-filling choreography. Three more Crossroads contracts for number one panto productions of their choosing next year.

Incidentally, the monkey had been reading Kerry Ellis’s autobiography “From Bumpkin To Broadway” and noted that in common with Ellis, all the Wimbledon Ensemble had trained at Laine Theatre Arts. All it can say is that Laine turns out superior performers of the highest calibre.

With the cast discussed, quick mention for the script. Some terrific up-to-date digs (a birthday party really isn’t officially a party if you serve wine and cheese), classic panto fare “If I were not in Pantomime” and “We’ll Have to Sing It Again (It’s Behind You)” plus newer stuff “The DVD Routine” proved themselves winners with all, the laughter erasing the fact the show happened a year late under the toughest of circumstances. To throw off and forget cares for just a couple of hours has to be worth the ticket price alone.

A vintage year for the New Wimbledon in every way, made unique by the stardust of panto magic provided by circumstance and lavished by the bucketful on the show by its cast and crew.