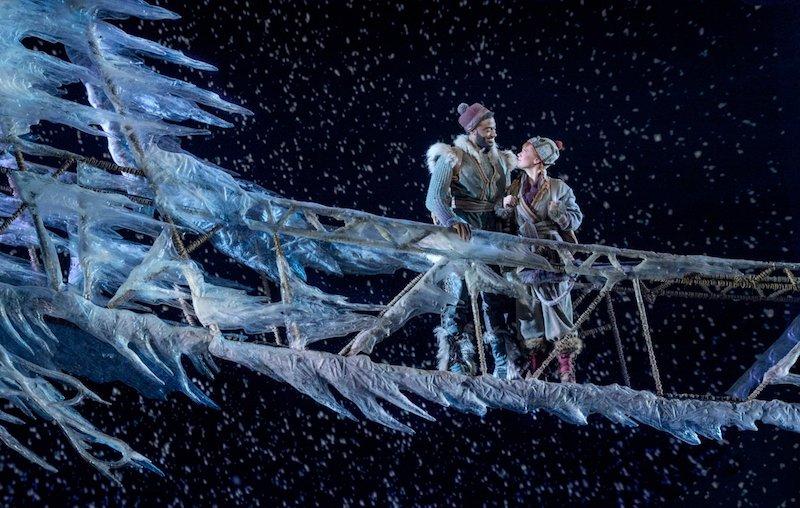 In the local Arendelle Centre, little girls are frozen until they let it go...

Er, no. This is the magical story of Arendelle. It's Frozen, thanks to Anna's sister Elsa. Anna sets off to find her, and meets friends along the way...

(seen at the preview performance on 1st September 2021)

An article in the show’s official programme notes that the size and facilities afforded by Drury Lane’s stage has allowed designer Christopher Oram to create a far larger production with extra scenery impossible at the show’s original Broadway home.

It is important to put that up front because Oram achieves something very special in London. Together with Finn Ross on video design and Jeremy Chernick’s special effects they manage to create several moments which have the audience gasping - one for which the applause is spontaneous and richly deserved - and over all transport us to a land of ice and snow, with the midnight sun burning bright in a land of love and friendship.

This is the core of “Frozen” and the glue between sisters which sticks little girls in particular to the animated feature and now the stage version. It was noticeable to the monkey that in an auditorium full of very young girls (many in wonderful full costume) the only sounds were appropriate applause, laughter (and booing!) as they absorbed the story with deep concentration.

It is nicely told for the most part. As Anna, Stephanie McKeon is the bounciest, funniest, kindest and most engaging princess you could hope to meet. It’s no wonder Hans (Oliver Ormson) is given firmly the great British “treatment” at the end of the show – well earned, nicely played.

Anna’s sister Elsa (Samantha Barks) gets the sparkliest of the wonderful costumes, and of course THE number. A surprisingly small role, Barks delivers everything required, making a detached Queen connect in a way that makes her final redemption believable - emotionally touching and truthful.

The helps and hinderances of the Royal pair are well drawn. Obioma Ugoala as Kristoff the Ice Merchant and owner of Sven the Reindeer (Ashley Birchall and Mikayla Jade on fine puppet animating form) hold the central part of the evening together and balance the female heart of the show with contrasting masculinity.

As Olaf, Craig Gallivan gets the puppet comedy and is an instant hit with the children clutching their own Olaf toys as they watch. It isn’t his fault that the one big number “In Summer” is in front of horrific cardboard cut-out scenery smashing the breath-taking polar atmosphere created just minutes before.

A large ensemble is given plenty to do by choreographer Rob Ashford and team. If the steps are not particularly original, they are at least lively. They function better in scenes involving drama, Pabbie (Joshua St. Clair) ramping up the tension as his people comes twice to Anna’s aid. The second sequence is a highlight, an un-named child particularly impressive as a tiny spirit of the country.

All of that said, the lasting impression is of a theatrical singularity. Quality stuff, and anyone calling it a “pantomime” should hang up their reviewing pen immediately and forever. And yet... for every moment soaring into the stratosphere, there are others which drag. Act two’s opening “Hygge” with a comedy “nude” (yes, and no, body stockings obligatory, this is done just in a Disney way) scene raises not even raising a snigger from a schoolboy, merely a snore from one father in row D.

When the show highlights its key messages, it is unbeatable. Judicious pruning would probably broaden its appeal as it is too slow for younger children and not offering much for sophisticated adults on their own. The Disney hallmark is there, it isn’t too sweet and has a little arctic bite. Whether that will prove addictive time will tell, but as a welcome back to London for huge musicals, the monkey will take it.

We were in the Balcony, row C 8-9. I'd booked the tickets what feels like years ago and then of course everything got postponed, so I know that I booked without a current seating plan to go off. However, I had assumed that the seating would start at no.1 and nos.8-9 would be more in from the edge - however the balcony seating starts with no. 8, so we were on the very edge of the balcony.

They're not terrible views, but as with any of these sorts of seats, if someone in the front row leans forward, they obstruct the view of anyone behind them. From these seats you do generally miss most of what is going on stage left due to the curve of the balcony, and unfortunately a lot happens there, as well as right to the front of the stage - luckily the 'Let It Go' sequence was unobscured as it mostly happens centre stage.

So, we missed an awful lot of the show, but I had taken a punt on the cheap £20 tickets so wasn't too annoyed - we were mostly very frustrated (as was everyone around us) with the tall young guy in row A, who missed the whole first half and then spent the 2nd half either leaning forward so no one could see or entering or exiting the auditorium and disturbing everyone each time. We have no idea why he kept being let back in.

However, the seats are comfortable and the theatre looks glorious. There is more leg room in the Drury Lane balcony than there is in the upper circle at the Victoria Palace Theatre, so that is something. Sadly our evening was mostly a concert as we missed so much and could only hear a lot of the singing, and I wouldn't sit in these seats again, but at least I know for next time!
____________________________________________

Row B Balcony, £30 in pre opening, you lose the extended part of the stage, so you miss some but not much. Bigger problem is people in row in-front, when they lean forward, which most seem to as I guess they miss even more of the front of the stage

You lose a good 50% of the show, sometimes all. At some points it was unwatchable which is a shame. The back row of the balcony looked like it would afford a better view, although you may miss some of the effects.

Gorgeous in the auditorium isn’t it. We were D21-23 in the grand circle - central, clear view of the whole stage, terrific sound and a great place to sit to appreciate the spectacle. Fantastic rake, it didn’t seem too far from the stage, no overhang, decent width seats and about the best Upper Circle experience we’ve had.

I liked the blue carpet and the snow. We had the most heart-stopping moment during 'Let it Go.' As Elsa went into the costume reveal and the climax of the song she swirled the dress off and absolutely went flying. Crashed down onto the stage, stopped singing, audible audience gasp etc.

Stalls C14. The rake isn’t fantastic so I did have a head in front of me (and I’m 6 foot!) and it is slightly to the side so there’s a few minuscule bits you don’t see thanks to cast blocking and set design, but for £20 absolutely zero complaints whatsoever!! If I was paying £90 then obviously I’d want to be in the centre, but it’s undoubtedly one of the best day seats I have ever scored.

"Day Seats:" Visit www.disneytickets.co.uk/disney-day-seats-tickets from 10am until 12 noon on performance days. £20 seats are available, first come, first served. Maximum of 2 per customer.
Other offers may be also be made, at box office discretion, this includes standing room in the Upper Circle, priced £20, sold once the theatre is full.

MAGICAL MONDAYS: Visit www.disneytickets.co.uk/disney-day-seats-tickets at 12 noon each Monday. £25 seats are available for all performances that week, first come, first served. Located at venue discretion. Maximum of 2 per customer.