The West End is set for a magical summer with the world’s greatest magic stars delivering incredible
jaw-dropping illusions that will leave you speechless!

MAGIC is coming back to the West End!

This summer at the Palace Theatre, the world’s greatest illusionists and mentalists are coming together in Wonderville, a jaw-dropping display of magic, illusion and technological trickery that will electrify, surprise and leave theatregoers in awe at what they are seeing on stage.

So step inside the home of ‘Harry Potter and the Cursed Child’ - and be transported by a variety performance like no other where the audience and their mobile phones play an integral part of the show... with comedy, illusion, magic, entertainment and mystery,  Wonderville is a fabulous show for all the family.

Josephine Lee, a breakout star on ‘Britain’s Got Talent’ and the most talked about woman in magic 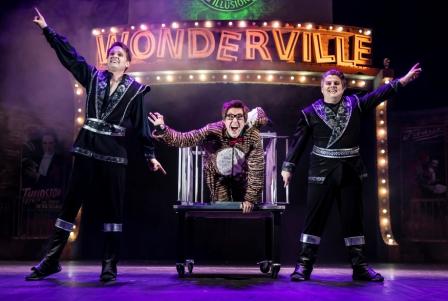 Young and Strange (above, with Chris Cox - photo by Pamela Raith) hailed by Penn & Teller as “one of the greatest magic acts in the world”

The fabulous variety line-up also includes Guinness World Record-holding Amazí and Symoné, stunning hula hoop artists who combine hooping with rollerskating and dance, who will alternate at performances during the season. 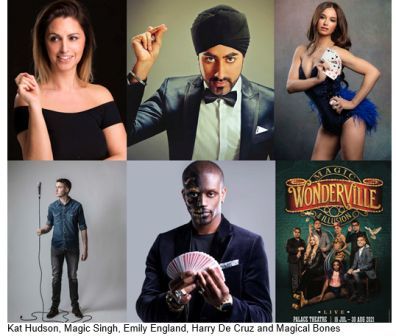 There is also a line up of exciting guest stars - four of them making their West End magic debuts:
Kat Hudson (25 - 30 August) appeared on ‘Britain’s Got Talent’, is one of the top female magicians in the UK, and has had 40 million views for her online magic. Her Northern charm and witty banter help make her stand out from other magicians. She makes sure there’s always a real buzz in the air whenever she’s interacting with her magic.
Twitter @KatHudsonMagic   Instagram @kathudsonmagic

Magic Singh (21 - 26 July & 11 - 16 August) began his magic career aged 11 on receiving a deck of trick cards. Today Magic Singh has over 2 million loyal followers on social media and transports his brilliantly unique and modern style of visual magic and mindreading to all corners of the globe. Twitter @magicsingh   Instagram @magicsingh

Emily England (28 July - 2 August) A fourth generation circus performer, Emily was a semi-finalist with her rollerskating brother on ‘Britain’s Got Talent’ and competed on ‘America’s Got Talent – The Champions’.  The Birmingham-born siblings now headline in the hit Las Vegas show ‘Absinthe’ at Caesar’s Palace. After switching to magic and training at the celebrated Las Vegas Magic School, this is Emily’s West End solo debut creating stage magic. Twitter @EmilyEngland_   Instagram @EmilyEngland_

Harry De Cruz (4 - 9 August) Everyone has a party trick. Harry has 374 and counting. As a pioneer within a new generation of creative magicians, Harry was Dynamo’s ‘Head of Magic’, he’s worked with Penn and Teller and has helped develop magic acts for ‘Britain’s Got Talent’ and ‘America’s Got Talent’. You might not have heard of Harry (yet) but if you’ve seen TV magic in the last 10 years, you’ve seen his work. ‘King of party tricks’ - Dynamo  ‘The REAL Harry Potter’ - JK Rowling
Twitter @HarryDeCruz   Instagram @KingOfPartyTricks & @HarryDeCruz

Perfectly capturing the zeitgeist of this peculiar season, the little resort of “Wonderville” is the quintessential British summer holiday experience.

Channelling the spirit of “Seaside Special, “Britain’s Got Talent” and every variety theatre, cruise ship and holiday camp ballroom from Bournemouth to Blackpool, this superior magic show offers something for everybody.

A lively welcome from mentalist Chris Cox introduces the surprisingly large cast of magicians and assistants / dancers, before we get into the acts themselves. Each has a pair of spots in the show, so if they don’t have you wondering how they did it the first time, you get a second opportunity to become even more baffled.

Edward Hilsum is the first person to hold all three “Magic Circle” competition titles simultaneously. His slight-of-hand produces ribbons, rubber balls, candles and entertainingly named doves (Penn, Teller, Young, Strange, Troy, Luna, Mickey, and Harry) from secret compartments all over his outfit. Later, he does it all again with help of a scene-stealing 6-year-old from the audience – take a bow again, young Dev. As he says, it’s a long way from the 7-year-old sitting on the grass of a marquee, too shy to interact with the conjurer, but finding himself up there anyway.

Young and Strange are an established duo, friends since childhood. A cardboard box and some sharp splinter-laden dowels are a different twist on the “swords through a lady” routine. They move on to bigger stuff in the second half - a tribute to their heroes Siegfried and Roy, which would have left that great Las Vegas pair flattered. Done with Morecombe and Wise humour, it’s entertaining stuff.

For those who saw 2019’s “The Illusionists” at the Shaftesbury Theatre, mind-reading Chris Cox repeats both routines. Lockdown may have been harsh on him, and his gratitude at being back raises much applause, but it has clearly had a positive effect on his work. A ball of crazy “kid’s TV presenter” energy his actual work is just that bit slicker. The humour is quicker, the technique sharper than ever – Capricorns are good at making adjustments (you had to be there).

Providing a little break from magic, roller-skating Symone is a colourful interlude as hula hooping is taken to a whole new level. A slightly too-long dance break – Mervin Noronhh and Lee Pratt covering nicely – is worth it for the eye-popping finish.

Sadly, despite appearing in the opening sequence, a dislocated knee meant that Josephine Lee was unable to continue with her own spot in the show. Fortunately, a pair of guest acts (normally, only one per night) filled the unexpected gap.

Hull’s Kat Hudson made her West End debut with witty quips and a reminder of why nobody trusts mobile phone shops. A neat bit of mathematical audience interaction leaves us in no doubt just how calculating some magicians can be at times.

Later in the show, Emily England, acrobat-turned-magician gets the very best from a chair, a deck of cards, a volcanic magician’s top hat and a dancing neon light. An original way to present very traditional tricks.

Guided by a video screen, the whole show hangs together well enough to overcome the loss of a key cast member. There are really only two faults the monkey could pick up on. The first is that the whole does lack, for a keen magic fan, something totally original and exciting. Perhaps Ms Lee could have been it, so it would be unfair to overly emphasise the point without knowing.

What does need looking at is the show’s finale. Instead of ending on the high-energy Vegas tribute with the words “you have been watching” and a list of performers coming on to take their bows, we get Edward Hilsum overplaying slightly his hand. Bringing an exhausted child back onto the stage, then cueing a lengthy blackout for the team to assemble, made it seem as if they themselves are unsure the show is over. A slightly downbeat ending director Annabel Mutale Reed could easily have remedied.

Still, the preceding two hours are proper summer family entertainment, and both Londoners and visiting British staycationers should grab the opportunity of a taste of proper magical entertainment while they can. 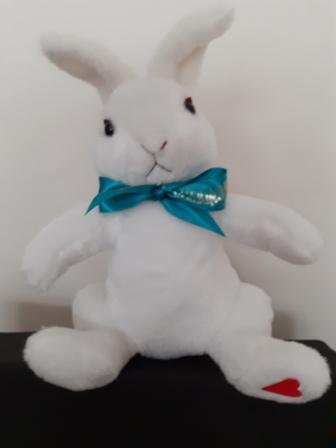 Forgot to mention that this little critter hopped off the bar and into my bag during the interval. Nice to have a really good quality souvenir, reasonably priced. Cheered my mother up no end when she adopted it the next day. www.theatre-shop.co.uk/wonderville.

In the stalls, the front row is currently removed, and row BB is cramped and only sold if the show is busy. The stage is high, legroom low in front of it.

Premium price seats are fairly reasonable, but you could go in front of them in row D or off to the sides from row H back or behind in row L and have a similar - cheaper - experience. Likewise, take rows Q or R at second price over row P - same view for fewer bananas.

Dress circle is similar - row D is perfect, so no need to pay more for central A to C. Skip H in favour of cheaper row I.

Upper circle seats are mostly second price - take anything in the stalls and dress circle for the same cash unless short and needing the height to see over those in front. Skip the back two rows as there are better views for the same money. Out to the ends of rows A and B are cheaper seats. B7 and B38 next to the more expensive ones are the way to go, otherwise look at the balcony.

Balcony front seats are cheaper than those towards the back - the stage extends forward and you won't see much happening at the front of it (vital for a magic show). Go as far back as you can, taking F before G (even if you will miss something from that row) to save a few pounds. Take side block after central block in all rows.