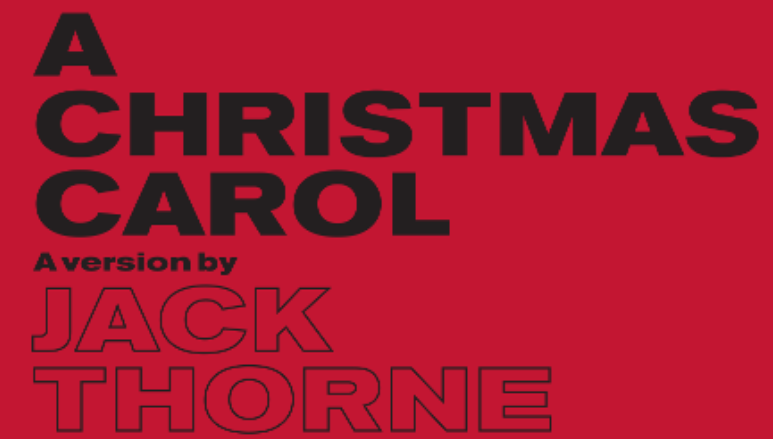 SUITABLE FOR THOSE AGED 11 AND OLDER.

Mean man taught a lesson by four (no, it never was three) ghosts.

A new adaptation by Jack Thorne, with Matthew Warchus directing the another revival of this Christmas 2017 hit, back life for its fifth anniversary, by popular demand.

A reader warns that, if bringing children who require booster seats, to arrive early. Apparently, there are not nearly enough to go around.

Notes from previous years. Some actors have now left the cast.
The monkey rarely has time to see any production twice. This exception, though, is worth it and is now as much a part of its annual West End Christmas as the Palladium panto.

After the first year Warchus resolved all the issues of timing in the first few minutes, with the actors now chatting amiably with the audience (orchestrating a "Mexican Wave" through the dress circle), passing out treats and gathering together to dance before the show starts in earnest.

The opening scenes now make sense and flow with the same rhythm as the rest.

Returnees like Myra McFadyen (Ghost of Christmas Past) show the others how it is done, a real pleasure to see them again. Oh, and Lara Mehmet (Tiny Tim) steals the entire show...

This reached the full 5 stars from the monkey in 2018. That year, it observed two bratty tweenagers, moaning pre-show about everything. Wide-eyed, open-mouthed and giggling with delight just 2 hours later. The pure magic of great theatre.

Don't miss it - and remember on the way out to stop by the manager's office and demand it is revived for 2020/21 (you did, well done - editor 2020), you'll thank yourself next year that you did.

(4 reviews from the 2017 production. Some actors have now left the cast)

Last night (29th November 2017) I had a wonderful time at the Old Vic for a lovely production of A Christmas Carol.

The Old Vic seem keen to fill every seat to add to the atmosphere(they also hand out free satsumas and mince pies to get the whole theatre smelling of Christmas!) so I was able to pick up a last minute bargain of £5 seats. These were N22 and N23 in the stalls.But I see these are normally on sale for £90 and if I had paid full whack I would not have been happy, since they feel far too low. AndI usually target the stalls front rows so am used to looking up at the stage. But here the ‘normal’ stalls are too low for my taste.And also there seems very little rake, if any, in the first few rows, so my shorter companion had a small problem seeing over the hair of the person in front of her. If going again I would aim for the stage stalls or the circle. Since the stage is raised and brought forward, the circle seats are closer to the action than normal.

We fought our way through the crowds to the Old Vic for the evening performance on Saturday 4th December 2017. The tube was horrendous,but we just about got there on time. A lovely greeting, not a mince pie fan myself, although they did look nice, but I was persuaded to a satsuma, which went down a treat.

We were in the back row of the seats on the stage, S49 and 50.Tight is not the word for it, I could only just sit down, and my knees were jammed into the seat in front, but the view from there wasperfect. I was concerned at the beginning, I didn't like the entire cast talking at once, but as soon as Scrooge appeared it was just magical. Proper theatre, we cried, we laughed, we cried again. Rhys Ifans was quite brilliant. The passing through the audience of the food was quite a genius comical touch. The ghosts all played their parts very well, and my respect for John Dalgleish grows every time I see him, he may never better the Ray Davis turn, but he really is showing his range to great effect.

We went to see A Christmas Carol last night (12th December 2017) at the Old Vic- are now in a festive mood and ready for Christmas! Loved it. Some lovely touches. Great voices. Great cast. Fascinating production, loved the little surprises! What a strong actor Rhys Ifans is.

In early December 2017, I attended "A Christmas Carol" at the Old Vic. Seat A29 in the Dress Circle was a lovely seat. It was discounted, due to a "reduced view" by a safety rail, but that was no problem. I was delighted to have such a great view at a lower price. I also got snowed on during the production, which was a fun moment!

All performances from 25th November 2021 onwards:
"Peak Dates" are at venue discretion, the system will indicate prices on enquiry.

Preview performances from 13th until 24th November 2021 only:
Note that the "PwC Previews Scheme" prices at least half the tickets at £10 for the first five previews. These tickets are released a few weeks before the show begins previews. Join the Old Vic Theatre website mailing list for the exact dates.