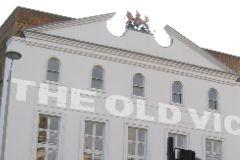 The traditional American Summer Camp of the 1930s. This one is on Long Island, New York, and is for children of German heritage... amidst the fun and first romances, a dangerous ideology is being communicated.

Bess Wohl's play is given its world premiere with Pasty Ferran and Luke Thallon in the lead roles.

(seen at the afternoon performance on 18th September 2021)

It is perhaps significant that at a time when state control over UK lives is at its highest in living memory, that London theatre is offering a slew of plays about fascism in all its forms.

The Almeida is presenting “Once Upon a Time in Nazi Occupied Tunisia” – and it would not have been a surprise had this been presented on the same stage as a companion piece. As it is, the Old Vic has chosen something most interesting.

Bess Wohl found out that her 2020 lockdown hideaway was just minutes from the site of the real Camp Siegfried – a German summer camp designed to foster National Socialism in the United States of America. Adults socialised, children worked, played and received a thorough grounding in the rising politics of the era.

On stage a shy Her (Patsy Ferran) is approached by confident him (Luke Thallon). She barely admits her half-German parentage. He revels in his full German blood and all that the Fatherland can offer.

There follows 90 minutes of uncomfortable transformation. Her political conscious is awakened as she strives for a command of the language, growing bold on a mixture of forced labour, studies, and artificial love. He does what is asked, to the best of his ability and the shift from dedication to blind devotion is subtle yet devastating even as it is presented as mundane.

Rosanna Vize keeps the stage almost bare and the costume change chilling. Rob Casey and Tal Rosner fill in contextual gaps with light and video. Rebecca Gausnell deserves particular mention for the German pronunciation and American accents. Given the actors, though, perhaps made it easier.

Patsy Ferran should be allowed nowhere near a hod or mortar. She is, as always, a marvel on stage. Her role requires explosive emotion from an introvert fantasist. Lying on a dock with a lover, lecturing at a rally, questioning kindness from those she is encouraged to reject. All demanded of her, all delivered with utmost credibility.

Incremental change gives Luke Thallon the requirement to enter thin pencil marks with every line, only revealing the full picture on the final words. The energy and power shift he finds with Ferran is the power of the play, director Katy Rudd employing disconcerting cuts whenever a significant change needs to be felt. That the audience core is shaken each time justifies her choices.

Ultimately, with just two characters and a vast subject, there are plenty of themes left unexplored. The sexual behaviour is accepted without wider context – no reference is made to external judgement. There is also a tantalising exploration of American values to be made, explaining the justifications and legitimacies of the young couple’s thoughts.

What we have is well-crafted and even better played. It may not chill – which is possibly not the intention anyway – but it will certainly resonate for hours.