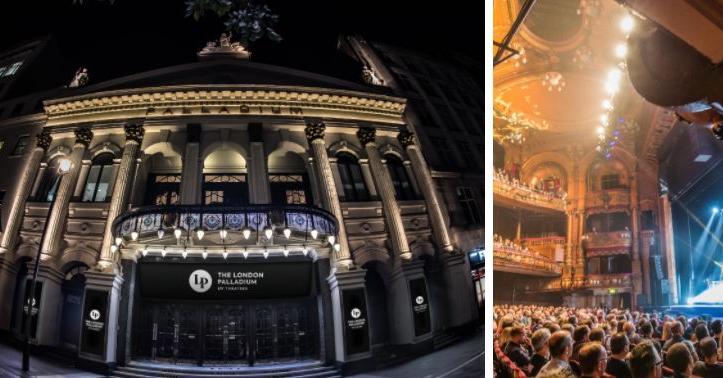 The Christmas Crazy gang - Julian Clary, Paul Zerdin, Nigel Havers and Gary Wilmot - return for a second attempt at bringing this Christmas show to the Palladium.

Donny Osmond, Charlie Stemp, Sophie Issacs and Jac Yarrow join them in a tribute to the best of panto in a show devised by Michael Harrison.

From the previous run. Some actors have now left the cast.
(seen at the preview performance on 12th December 2020)

Last year the monkey praised “Goldilocks and the Three Bears” for taking panto back to its variety roots, with hoards of speciality acts interspersed with the usual Christmas Crazy Gang antics.

This year, we are lucky to get any sort of Christmas entertainment at all – and at the time of writing it could be closed at any moment. For those who can grab the chance, necessity has provided something remarkably interesting.

“Pantoland” is mostly a compendium of the best routines from previous shows, held together by the usual foolery we’ve come to expect of the resident Christmas Crazy Gang.

There’s no story, no huge ensemble dance routines or giant special effects. Even the scenery and costumes are from “Cinderella” and “Dick Whittington” and the wonderful handbills of yesterday proscenium is a delight.

A sequence of set pieces demonstrate exactly how the great tradition of pantomime works. We get much loved routines like “The 12 Days Of Christmas” from their award-winning “Dick Whittington,” Gary Wilmot’s stellar “Underground Stations” and a short act two appearance by Elaine Paige’s Queen Rat.

Paul Zerdin produces the same act as usual, but luckily, he does the hilarious “ist” routine and breaks some new ground as Sam sings with the breathtakingly brilliant Beverley Knight. How the lady keeps a straight face is anyone’s guess – but it’s that “worth the price of the ticket” moment on its own.

Charlie Stemp and Jac Yarrow are a little “before” and “after” demonstration in themselves as the more experienced former shows what time and practice will mould the latter into. A pair worth retaining in the core company.

Julian Clary is his usual “over the heads of children” self, deciding the monkey was “chatty” before moving on to other front-row victims.

“Diversity” provide two energetic sequences which probably work better viewed centrally and further back than the monkey was sitting, but it was good to see a couple of new female members in the team.

For a show that had to come together in a few weeks, Michael Harrison and his team really pull off something quite unique and rather special. The show may not be nearly as glossy as usual, but it is served with a good deal of hearty tradition demonstrating just why the art form is so British it defies comprehension by anyone not in on the joke. Also, a proof that the strong resident company is – staged “corpsing” and scripted errors included, one that must be kept together at all costs. They close with the promise of all meeting again next year for a proper Christmas panto. The monkey will hold them to that.