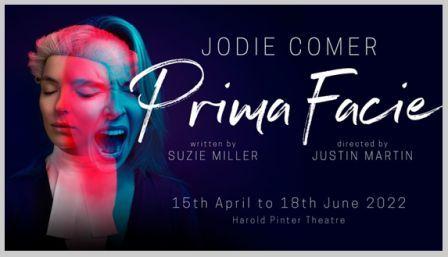 Working class Tessa is now a brilliant young barrister. It is still a patriarchal world - and she has to confront it.

(seen at the afternoon preview performance on 21st April 2022)

The British love a good courtroom drama. Even more so a good legal monologue with a star name as the doughty legal beagle. “Clarance Darrow” sold out at the Old Vic months before it opened and so has this show, on the name of Jodie Comer alone.

To be clear, the monkey would have booked to see the play whoever was in it, and further, it has never knowingly seen Ms Comer work, nor has it much clue who she is. So, it saw the performance in its usual (un)balanced neutrally opinionated way.

Author Suzie Miller has a background in law, with several international playwriting credits to her name. Here, she opts for a cookie-cutter idea with the small twist that a working-class cis-female barrister who normally prosecutes rapists is herself the victim.

The writing is almost as economical as a barrister’s question, but establishing a not very original back-story takes over twenty minutes and the real conflict doesn’t arrive for more than an hour – as the second act begins.

Fortunately, given Comer’s background, there can be no accusation of patronising the working class in the casting. Not knowing the leading actor’s autobiographical details beforehand, the monkey is therefore impressed with her channelling of her background into her performance.

As Tessa, Comer is steady, consistent and avoids descending into melodrama at the most crucial moments. Deceptive, as the simplicity of delivery at those times belies considerable conflicting emotions beneath. Hands twitch, the body stiffens, speech and movement change pace with an abruptness not present before.

The issues in the piece lie mainly in the details. Checking with both google and the monkey’s knowledgeable online twitter followers, it was correct in thinking that the use of terms like “sustained” and “overruled” are Americanisms not used (in public) in English courts. The monkey also aways thought that barristers never shook hands with each other. Certainly, they don’t in court – and it wouldn’t be encouraged in chambers either. So, the author may here be making a point or she may not.

The real oddity is an apparent loss of confidence in dramatic structure near the end. SPOILER ALERT
By asking the jury to leave the box for a while and let Tessa have a lengthy say before the trial continues.
SPOILER ENDS.
This oddity provides the writer an opportunity to expound her points about rape trials and statistics, but is a crude device, especially given how integrated her arguments are woven naturally into proceedings up until that point, and have considerably more impact than this peculiar lecture when doing so.

Given that the play is preceded by an odd “trigger warning” announcement (explanation, due to reader comment - due to the time it is given, when everyone is already seated, a bit late / also that the same warning is given when booking and on the pre-show email), which is also unnecessary as what is said to that point is what any good court reporter may set out, there is a very odd lack of faith in the material which is unjustified. (again, explanation due to reader comment, that there is nothing over-dramatized, the writer sticks to the sort of facts found in any normal transcript. No comment on the crime itself should be inferred, particularly diminution, as that is not the intent).

Finally, and again the monkey stands to be corrected on this minor note, a reference to being the only woman in the courtroom suddenly seemed nullified by a female police officer appearing moments later in the narrative.

Some odd directorial decisions see clumsy on-stage costume changes and a formally dressed victim remaining shoeless in the witness box. Combined with the device of bringing the houselights up to allow a rant to take place “breaking the fourth wall” between actor and audience, it all strains credibility at the point where we needed most to believe.

“Prima Facie” means “at first sight / look” and legally is a case which requires lesser proof than the usual “beyond reasonable doubt.” This play does rather hold to that. It is instant in its accessibility thanks to the familiar and simple structure. It also says little new but re-iterates a point anyone who takes an interest in the law already knows about how cases of rape are (mostly not) proceeded with and the likely outcomes.

To sum up, a convincing if not deeply affecting performance in a reasonably polished play given a high-quality presentation.

"Royal Circle Day Seat Standing Room": The view was EXCELLENT, possibly the best standing tickets I have ever got, just make sure to avoid the pillars (you'll know it when you are there) and not a single scene is restricted! the Royal Circle is also pretty close to the stage, IMHO. I'll be honest, you probably see even better than the 2 rows in front of you because you're taller.

Every Wednesday at 10am, 30 "Pay What You Can" seats will be released for the following week's performances at primafacieplay.com.

Additionally, standing places are sold each day at the theatre box office from 10am.