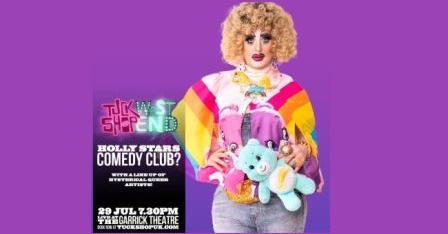 A summer festival of drag shows and performances; the first time a West End theatre has hosted such a celebration of homegrown talent.

Gals Aloud - Friday 30th July 7.30 / 10.30pm: Starring Cheryl Hole from Drag Race UK. The FIVE-Star smash hit comedy Gals Aloud are coming to the West End for the first time. This is the ultimate drag tribute to the best girl band of this millennium... Girls Aloud! Direct from smash hit seasons at the Underbelly Festival, Manchester, and Christmas in Leicester Square, Nadine, Cheryl, Kimberley, Nicola and Sarah are back, as you've never seen them before, in a show packed full of the biggest hits from their classic solo singles, hilarious TV appearances, plus the return of the one and only; Javine!

Drag Queen Bingo: with Charlie Hides - Saturday 31st July 7.30pm: A raucous, hilarious, madcap night of bingo in an actual west end theatre with Drag Race star Charlie Hides. Amazing prizes to be won, and a lot of fun to be had.

Born this Way: A tribute to Gaga - Saturday 31st July 10.30pm: An iconic tribute to Mother Monster, with some of the best drag the UK has to offer. It’s going to be Stupid, Love. All the hits, looks, and iconic moments you’d expect from Lady Gaga, with a fierce drag twist. Featuring HERR, Ophelia Love, Bones, Jason Kwan, and Bailey Jay Mills.

Baga and the Broads - Tuesday 3rd / Wednesday 4th August 7.30pm: Baga Chipz headlines this raucous, who-knows-what-could-happen night live in the West End with some of the staples of the UK Drag scene… Son of a Tutu, Mrs Moore, Lola Lasagne, LoUis CYfer, and Rose Garden. Join them for a night of classic british drag like nothing ever seen on a West End stage before.

The Bitten Peach - Thursday 5th August - 7.30pm: The Bitten Peach is the UK’s only gender-diverse Pan-Asian cabaret collective made up of performers of Asian descent working in a variety of nightlife performance genres, including drag, burlesque, dance, comedy, music, and circus. Founded in 2019, The Bitten Peach is dedicated to increasing and diversifying Asian representation on the drag and cabaret scene.

Spice Gals - Friday 6th August 10.30pm: If you wanna love my lover, you've gotta tuck with my friends... The Spice Girls are back as you've never seen them before in SPICE GALS. Spice Up Your Life as Baby, Sporty, Posh, Scary and Ginger come Right Back Atcha with this hilarious, fierce, camp drag

show will have you reliving all the best moments and biggest hits of the Spice Girls. This hilarious and fierce full drag show takes you on the highs, the lows, the break ups, and the reunions! You don't Wannabe be missing this fabulous night as they Swing, Shake, Move and Make your night!

The Cocoa Butter Club - Saturday 7th August 7.30pm / 10.30pm: A night of daring drag, designed to decolonise and moisturise your life, is coming to take the stage of The Garrick! It's time for a thick, generous serving of the UK's premier platform for showcasing and celebrating Performers of Colour. An award-winning affair; expect everything from Burlesque to Circus, Voguing to Vocals, and Regal AF pieces by our Kings, Queens, Otherworldly Beings.

They're the Black-British led collective that promises to have us screamin' "oooweee, smells like Cocoa Buttuh up in hurrr!"

Drag me to the Musicals - Sunday 8th August 7.30pm: A camp ol’ knees up salute to musicals, with a fierce drag twist. Expect surprise guests from the West End!

With the huge rise in drag popularity over the last ten years, TuckShop is at the forefront of UK Drag culture, coming hot off the heels of Chris's fifteen years’ experience in the West End as a producer, theatre manager, and marketing expert. As well as creating bespoke productions and producing nationwide tours, TuckShop also represent some of the UK's best Drag talent, raising their profile through branding, promotion and regular bookings. With new productions in development, an ever expanding roster of headline performers and our new online store, TuckShop works tirelessly to give Drag the leg-up it deserves.

With no premium seating, central stalls forward are great value. Even better, single seats on row H and the restricted ends of rows from O back are lowest price. At second price, take R over Q - same view, cheaper. At third price, U 4, 5, 20 and 21 are a way of being further forward. Row X for the same bananas is on a plinth with a better view if anyone tall is in front, though.

Dress circle ends of B and C are also bottom price - you miss the sides of the stage but they are good value for the cash. Rows D and E are second price, stick to the central seats and you won't go far wrong if legroom isn't vital.

Upper circle central seats are fair value at third price, or go a bit beyond them for some decent bottom price tickets once the restricted view stalls and dress circle have gone.

Sunday to Thursday at 7.30pm
Friday and Saturday at 7.30pm and 10.30pm
NO MONDAY PERFORMANCES.

Book 4 or more shows at the same time and save 25% if booked with www.nimaxtheatres.com.