NOT SUITABLE FOR THOSE AGED UNDER 15. CONTAINS ADULT THEMES AND MATERIAL.

1963. Teenager Baby and her family head for the hillside country hotel resorts that provided wealthy Americans with a programme of entertainment and relaxation back then. While her older sister as usual gets all the attention, a hunky dance instructor decides that nobody puts Baby in the corner... and teaches her about life, love and how to have the time of her life...

Adapted from the film, this features all the well known songs and evokes the era, drawing the audience in the action of Baby's best ever summer.

The tour returns to London's Dominion Theatre for a second season following a triumphant run in 2022.

(seen at the afternoon performance on 12th February 2022). Some actors have now left the cast.

A blog from this tour, seen at the New Wimbledon Theatre in 2018, is available here. 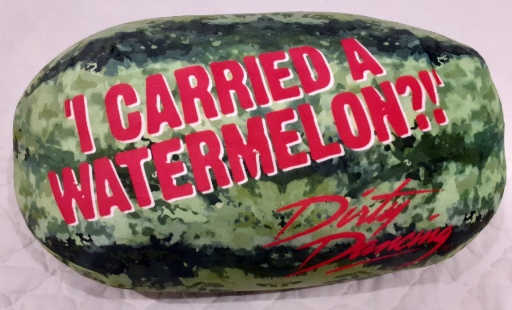 Yes, the monkey really did - and has the souvenir cushion to prove it (gift shop by the stalls entrance / dress circle by the main entry staircase).

The tour cast is pretty much the same as 2018, with a few changes and covers for those staggering under the weight of fruit. To note those first: the lead role of dancer Penny goes to Carlie Milner, a strong actor too, and blending well with Michael O'Reilly in their key dances together.

Looking slightly young for his family, Ben Harrold covered the role of Baby's father, Dr Jake with a sincerity, particularly his admission of his mistake at making assumptions. Another covering performance from Lee Nicholson as resort owner's son Neil Kellerman was also a success. Kira Malou's reaction to him and his well-meaning but clumsy attempts to impress felt natural. Also natural was Michael Remick in the role of Max, his father, no surprise at he was a returnee to the role.

Other new faces included Mimi Rodrigues Alves at Elizabeth, with a show-stopping vocal to a vast auditorium, and nice supporting work from James McHugh as Robbie and Thomas Sutcliffe covering as Billy.

The show itself is in good shape. If the Dominion feels a little large at times for the smaller moments (the "watermelon" line needs re-directing to take place centre stage, feels the monkey), the large dance sequences fill it as well as any other show, and the covered orchestra pit brings the action up close.

As an antidote to these troubled times, this remains worth taking a little time of your life.

NOTE: the show is popular, the theatre big, meaning the lines to get in - due to security checks - are long. The monkey advice is to arrive at least 45 minutes before the show, and if the line extends around the corner, your wait will be around 20 minutes to get into the foyer.

I believe this is the touring company set, moved onto the vast Dominion stage.  And it shows.  It's a simple set, yet allows them to set up every scene seamlessly.  But the Dominion stage is so huge it makes it hard to hide certain scene changes (some very inventive use of the ensemble comes into play).  It's beautifully lit as well.  The actors give it their all, it's full of all the numbers from the film.

But there are issues with the pacing.  It feels like they're rushing though the scene setting to get to the (spoiler aler... oh come off it, we're born knowing the plot) good bit where Johnny teaches Baby the dance routine.  Once we're here the pacing sorts itself out and the story unfolds as it should.  Though it did feel like we were trying to get past the build up to that line and that lift as quickly as possible towards the end.

(Personally, I'd lose the "Martin Luther King scene that sets up Neil discussing going on the Freedom March.  Not only is it completely out of character (funny how he doesn't mention going on the march until he realises Baby is a social crusader, it's a throwaway comment to try to get into her pants), but it sets up a later redemption his character neither needs nor deserves.  Lose this and you'd free up time to pace the early scenes more evenly)

I do miss the bridge from the previous production, being able to raise and lower, it created so many opportunities and set so many scenes effortlessly.  But new production, different set.

Shout outs to Kira Malou (Baby); perhaps too innocent to begin with, the strength and passion as Baby goes out of her comfort zone and tries to help?  Nicely done.  Michael O'Reilly (Johnny); Dear Lord, the producers of Rocky Horror Show must be staring enviously (as was every man in the room) at his physique!  Again, his switch of emotions from the confident, swaggering dancer to the insecure, pushed down by 'The Man' side of his personality?  Well played and totally convincing (as was his drawl of an accent).  Lynden Edward's Dr Houseman was played with great sensitivity, his scenes with Kira?  You believed they were father and daughter.  And big shouts to Mimi Rodrigues Alves and Samuel Bailey who carried a lot of heavy hitting in the musical numbers.

Not perfect?  No. But it has all the things you want carried over from the film, the cast give it all they've got and the final payoff is played with aplomb.  To me it would benefit from losing the 'freedom march' scene to allow better pacing and the set would (and I imagine did) work better on a smaller stage.

Stalls G4 & 5: Despite being right to one side, it isn't an issue as (a) the Dominion stage is vast, meaning you're still on the edge of the stage and (b) possibly the most generous seats in Theatreland (in terms of room) allow you to angle yourself straight on.  Comfort is outstanding (guessing the seats were refurbished when 'We Will Rock You' ended), more than enough legroom. There are downsides... there is little or no rake this far forward, if you're unlucky enough to get a tall person in front this could cause issues (booster cushions for the smaller theatregoer are kept in the Merch shop in the foyer), and the sound over to one side can be patchy (Dirty Dancing: The "thumps" at the start vibrated through me, some of the dialogue could be hard to pick up, I'd guess it's perfect in the centre of the row).