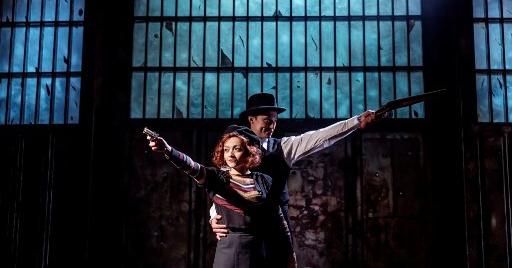 A pair of crazy kids who bring out the worst in each other. She loves him, he loves her, they both love robbing banks.

The legendary story of lovers-in-crime in a musical by Ivan Menchell, Frank Wildhorn and Don Black. Its first West End production, following a sell out concert version at the Theatre Royal, Drury Lane in January 2022.

Frances Mayli McCann and Jordan Luke Gage star as the titular Bonnie and Clyde, with George Maguire and Natalie McQueen as Buck and Blanche Barrow.

Casting information is given in good faith, but theatremonkey.com cannot be liable for changes or absences at any performance.

(seen at the afternoon preview performance on 13th April 2022)

The monkey’s expectations of this were heightened by the triumphant concert version in January 2022. Given a full production for the first time in the West End in April 2022 and retaining many of the fine concert cast, the monkey is delighted to report an even bigger hit show.

Fitting perfectly onto the small Arts Theatre stage, Philip Witcomb’s sliding panel and small side shelf design is given vivid transportation qualities by Nina Dunn’s background video screen. A performance in itself; combined with some ingenious props the impact is even more impressive in the confined space they must work with.

The characters too can become more personal to the audience as they are not behind the vast orchestra pit gulf of Drury Lane.

Aiya Agustin (Young Bonnie) deserves recognition for opening a show at such a young age – the first lines are difficult for any performer as they set the entire tone, and this young actor has confident style. As Young Clyde, Finn Barwell takes up the baton and produces well-judged commentary later in the show.

Of the adults, Jordan Luke Gage’s Clyde is a young tearaway, selfish teen and twenty-something and “bad boy catnip” to Frances Mayli McCann’s Bonnie. The chemistry is literally explosive between them, McCann building on her Drury Lane triumph and both her and Gage exploring very deeply their characters. By the end of the run, the local Barclays should probably double their security door detail.

George MaGuire and Natalie McQueen as Buck and Blanche Burrow repeat their concert triumph as well. Again, time has given them opportunity to refine their relationship, and the sense of disappointment as Buck’s redemption fails is palpable in every inch of McQueen’s body... just as Buck’s proves himself little better than his brother in the end.

In smaller roles, Cleve September as good officer Ted Hinton has a remarkable moment of reflection in song. Ako Mitchell as the Preacher is also a powerful commentator and in the acting stakes Alistair So as Sheriff Schmid has a rare gravitas and absolute credibility as the leading face of the law.

Nick Winston manages to improve on his concert directing triumph by finding means to expand the work emotionally and make a tiny acting area feel like the wide open United States.

A special note is due to the stagehands on this show. Being a preview, they were working extra hard, and the monkey’s seat had a view of the struggles going on in the wings for most of the performance. A highly amusing appearance by “Thing” in the first act, a hefty petrol pump falling over just before its entrance and a swinging backdrop showed how hard they were working. Yet the show never stopped, most of the audience were totally unaware and the performing cast remained relaxed as they knew just how good those who really make the show happen are.

This long-awaited debut is near-perfectly staged, full of numbers that will stick in the mind long after the last shot has been fired and which are even stronger in full production than in concert; the monkey couldn’t improve on its comments in its original blog.

It’s a big show in a tiny theatre for a short time, don’t miss it.

A criminal pairing turned into folk heroes by the public at a time when heroes were in short supply.  Their story has been romanticised over the years; would the book here fall into the same trap?   I’ve seen, read and heard a lot of archive material, and can confirm - gladly - Ivan Menchell’s book sticks (mostly) with the facts.  OK there are a couple of minor liberties taken with the storyline to aid continuity.  But this is the true story of the couple.

What a fantastic set. It appears so simple (some side shelving and a central panel), but clever use of sliders and back projection turn it into homes, cafes, prisons, chapels… and the ‘Death Car’ (more on this later; not calling this a spoiler; if you don’t know what happened to them, what cave have you been living in?).  The lighting deserves applause; not least for the ‘blood’ trick in the car both at start and end of the production.  And it’s amazing how - with just a few props - you can transform an area.  Brava to all involved.

Costumes are spot on for the period (though, on the night, we didn’t get to see Bonnie’s most famous outfit, I’ll explain why in a moment).

Frank Wildhorn and Don Black’s songs evoke the period perfectly.  There is one dip: ‘Made In America’, the 2nd half opener, goes on a touch too long.  Other than that?  It’s a fantastic score, with generous time made for the ensemble but with big numbers for the main cast.  Stand out numbers being ‘Raise a Little Hell’ (especially the reprise with Clyde and Buck) and the emotion-filled ‘Dyin’ Ain’t So Bad’, performed on the night wonderfully by Lauren Jones.

The story pacing is perfect, with a great mix of (dark) humour and drama. A very minor niggle is the limited involvement of Frank Hamer; without him, I believe the hunt would have taken a very different direction.  But I get that needed to be sidelined to concentrate on the main pair.  I was pleased to see the story of Ted Hinton get good stage time; he wanted to try to save childhood friend (and would-be girlfriend) Bonnie all along, that was an integral part of the story.

I have to give some cast shout-outs.  On the night we went we had a number of cast memes making their debut in the roles.  The unreal levels of talent in the West End was proven:

Lauren Jones as Bonnie - not a hint of nerves, she nailed that West Texas drawl, moved from emotion to emotion perfectly (a standout moment was when she set herself to slap Clyde back, the one time he raised a hand to her) and her rendition of ‘Dyin’ Ain’t So Bad’ had the entire audience holding their breath followed by an explosion of applause (repeated at her curtain call; tears in eyes for very different reasons each time).  If they ever make a musical about Clara Bow (and they should; hers is a fascinating story), Producers and Casting Directors look no further than this young lady.

Barney Wilkinson as Clyde.  Perhaps a little nervous at the start as he felt his way into the role, by the time he hit ‘Raise a Little Hell’ he was in his stride.  You felt his pain when he was abused in prison.  The passion between Clyde and Bonnie was real.

I also have to say good things about Charlie McCullagh, who played multiple parts on the night, often with little time to transition.  Well done.

But it feels wrong to leave out anyone.  Everyone shone in their part, no matter how big or small (but I do have to keep this review from getting too long!)

This is a great show.  Sadly it’s only on for a short time (hopefully it will be brought back before long).  Go and see it, it would be a crime not to do so.

Arts Theatre Circle E12,13,14. You need a lot of luck to be able to see here! Seats are low, there doesn’t seem to be much rake once you’re sitting down and there’s no staggering. If anyone slightly taller than average sits in front of you (as they did) it really blocks the view.

Fortunately we had a spare seat next to us so could lean into the gap. I’d take the row behind rather than this one if I had a choice as at least you could stand up or sit very straight without bothering anyone.

I don't remember seeing anything here before and loved the student union type vibe going on, once you get your seat choice right it would be great!

Good show though - thanks for the review!

DAY SEATS: A limited number MAY be available each day at the theatre box office from 10am, first come, first served. Limited to 2 per person. They MAY NOT always be available, and the theatre reserve the right to charge more than £29.50 for some seat locations.

RUSH TICKETS: App Todaytix are offering £25 "Rush tickets," located at venue discretion, for all performances. Released for the performance on that day, first-come, first-served. Download the App from Todaytix.