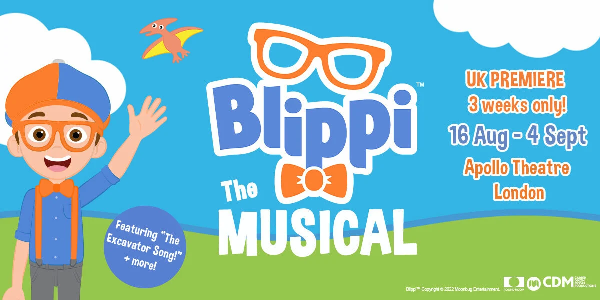 In just a few years since his inception, Blippi has become a global sensation with over 37 million YouTube subscribers and one billion views per month. Millions of kids have joined him on amazing playdates and learned about vehicles, professions, animals, the natural world and so much more.

Now Blippi The Musical, a live show inspired by the global TV and internet sensation and seen by over 200,000 families this spring in the US and Canada, will bring the playful, and relatable antics of the beloved character to the UK for the very first time.

Blippi The Musical brings the curious and fun character Blippi off the screen and onto the stage with world-class production, audience engagement and amazing music. Blippi encourages learning through doing, playing and exploring – inspiring a child’s natural curiosity about the world around them. In the live show they will continue to learn about the world around them while singing and dancing along with this one-of-a-kind show.

The show will premiere in the West End for a strictly limited season.

For Blippi The Musical, the character Blippi will be played by professional stage performers selected specifically for the stage show.

Blippi is available in the UK on some of the largest premium streaming services such as Netflix, Amazon Prime and Virgin Media.