Monday Night at the Apollo 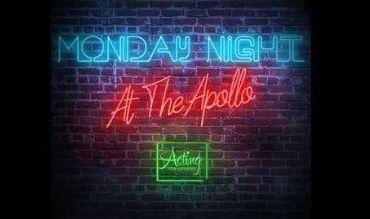 A brand-new concert series taking place in front of a socially distanced audience at the Apollo Theatre on Shaftesbury Avenue. The concerts will also be livestreamed to audiences at home - bookings can be made via www.nimaxtheatres.com in the usual way.

An intimate evening of conversation and song is hosted by Greg Barnett, and the shows will see some of the West End’s best-known performers sing an eclectic mix of music from their favourite genres. Performers will share their most cherished memories and experiences from their careers, alongside performances of music which is personal to them, in a relaxed and informal theatrical celebration.

The announced artists have agreed to have their names associated with ‘Monday Night At The Apollo’ to show their support for both this production as well as the wider reopening of the industry. Their performances will be subject to availability and any changes to the cast will be announced on a rolling basis. Announcement of line-ups for individual dates will happen at least four weeks prior to each.

The star line up confirmed for the first concert of the series on Monday 24 May 2021, both live and simultaneously livestreamed to viewers at home via the theatre discovery platform Thespie will be: Aimie Atkinson (Six, Pretty Woman), Cassidy Janson (&Juliet, Beautiful), Lucie Jones (Waitress, Rent), Cedric Neal (Chess, Mowtown the Musical) and Julian Ovenden (South Pacific, Downton Abbey) will join on-stage for an intimate night of music and theatrical chat, featuring ovation worthy performances of songs from their favourite genres. Host Greg Barnett (Miss Littlewood, Swallows and Amazons) invites his audience behind the curtain to catch these castmates as you’ve never seen them before.

The star line up has been confirmed for the second concert of the series on Monday 14 June, and simultaneously livestreamed to viewers at home via the theatre discovery platform Thespie, will be: Shan Ako (Les Miserable, Xfactor), Arthur Darvill (Once, Doctor Who), Sophie Evans (Wicked, Wizard of Oz), Sandra Marvin (Waitress, Emmerdale) and Oliver Tompsett (&Juliet, Wicked) will join on-stage for an intimate night of music and theatrical chat, featuring ovation worthy performances of songs from their favourite genres. Host Greg Barnett (Miss Littlewood, Swallows and Amazons) again invites his audience behind the curtain to catch these castmates as you’ve never seen them before.

Monday Night at the Apollo has been conceived of to support the theatre industry, and ten percent of all ticket sales will be donated to Acting for Others, an organisation made up of 14 individual theatrical charities.

This concert series is musically directed by George Dyer, and produced by Greg Barnett and Hugh Summers for Wild Mountain Productions Ltd.

In the stalls, rows B, D, G, L, T and V are removed to provide extra space, increasing legroom. Central rows E to J are "premium" seats. Plenty of good stuff around it - row C if you don't mind looking up at the hight stage or seats H and J f or 18 or row K for those not willing to look upwards. Rows W and X are second price at all performances - take W first, or X6.

In the dress circle, rows B and D are not used, providing social distancing. This means premium seats are in rows A and C only. Ends of rows A and C are cheaper - take the cheapest seats first, fair value.

In the upper circle, rows B and D are not used. Row A is the cheapest in the place - take it only if you don't mind the cramped legroom. Worth considering the discounted outer seats in C and E too - same view, cheaper if you have the seat next to the more expensive one.

All performances begin at 7pm.

Runs 2 hours approximately, including an interval.

Londontheatredirect.com offers seats with a £10 on £50, £7.50 on £45, £5.50 on £27.50, £4 on £20 per ticket booking fee. There is a £1 per booking, not per ticket, transaction fee for collecting tickets from the box office before your performance. Alternatively, if time allows, there is a postage to your home option, costing £2.95 (£4.95 to non-UK addresses) per booking, not per ticket. Optional Ticket Insurance is also available. Discounts and Meal and Show Packages may also be available.