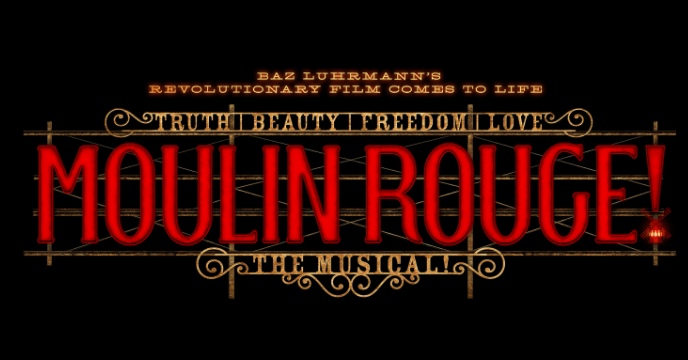 CONTAINS STROBE LIGHTING.
NOT SUITABLE FOR THOSE AGED UNDER 12 OR THE EASILY OFFENDED.

Rocking in Paris, a crazy tale of beauty and freedom - less a musical, more a state of mind.

Based on the Baz Luhrman movie, this Broadway hit comes to London.

(seen at the afternoon preview performance on 27th November 2021)

Some 38 years after an ill-fated attempt to turn the Piccadilly Theatre into a cabaret venue featuring Parisian-style show “I” (later, “Y” – the show which actually opened – long story), the Moulin Rouge arrives with an overpowering bang.

Based on Baz Luhrmann’s 2001 film which blended startling images, the then-fashionable “musical mash-up” style of mixing contrasting songs, and a simple story of a love triangle between dying chorine, immoral Duke and star-struck poor boy, this is the live version, most music intact with a few more added to give it stage running time.

It's glitzy as hell, Derek McLane and Catherine Zuber do a phenomenal job on set and costumes respectively. Nothing which cannot be covered in sparkle goes without, anything which should not be anyway, is. There’s no point the French demanding fishing rights in British waters either – all their nets are on the legs of the cast here. You’ll hear it just fine with Peter Hylenski’s sound design keeping it the right side of exciting but not too loud for comfort.

The problem for the monkey was the pace. John Logan’s book squeezes almost all the huge musical stuff into the first half and Alex Timbers direction has the energy which made the lengthy opening numbers in particular feel like being beaten repeatedly round the head with a slice of chocolate cake.

There’s space for excellent solo performances – Liisi LaFontaine’s Satine and Jamie Bogyo’s Christian unforgettable in the spotlight on the extended stage. The whole cast rock the joint as an ensemble (arrive early to catch a little posing) too when called on. Oddly, however, there’s not actual “stop the show” moment as the tone is relentless.

By the second half the show decides to develop what little storyline there is, and the music, choreographed big numbers and cabaret atmosphere fall away in favour of longer spoken scenes with less humour landing than probably intended. They pretty much pull it back by the final scene or two, but it all feels a little past its welcome by then.

Still, mention must also be made of the wonderful Clive Carter as club owner and MC Harold Zidler – is this what the MC in Cabaret’s father looked like? Stupendous performance too from Jason Pennycooke as Toulouse-Lautrec, getting real pathos into his character even as Simon Bailey as the Duke oozes increasing poison in his.

Notes too for Sophie Carmen-Jones as a slight Nini, in a nice bit of work with Elia Lo Tauro as Santiago; oh, and a quick shimmy for Timmika Ramsay as adorable La Chocolat, well named for sweetness.

Certainly it is value for money, every penny is lavished on the show as is every ounce of creative talent from all involved. If you loved the film, you’ll love this. If you didn’t, you could be convinced by the physicality of it all.

It’s satisfying enough, and probably memorable for spectacle for a while after. It’ll run years, unlike its 1983 ancestor, but for this monkey one hit of the cake was more than sufficient, though it enjoyed the slice plenty while it was happening.

"M 11, 12 and 13 - Grand Circle.
Interesting seats ... very high up, very central, very well raked.  They're like bar stools with a foot rest under the seat and they're quite high to get onto (especially if you're short!). Not sure how well you'd cope if you had any mobility issues. There is a bar in front of you which you can lean on and which didn't hinder our view. Access to the row is a bit tricky as there isn't much room to get past people and there is no centre aisle which means you're up and down a bit (on the awkward to get on to seat). However, for £25 this is a decent option and I would consider sitting here again - thank you for the tip!!

Went to see Moulin Rouge last week (18th July 2022). We were in the stalls C19-21. Great seats, on the edge of the super expensive packages. Felt in the middle of the action, could see actors' expressions clearly but without neck craning as some further forward were doing.

SEAT REVIEW : STALLS ROW B Seats 10 and 11
As the last two seats of the row these seats had a great up close view of the actors on stage whilst being far enough from the main stage area to avoid neck ache!

The view from seat 11 is unobstructed as there is no seat in front (also meaning unlimited legroom). Seat 10 has a small wall in front of it separating Row B from the cabaret table area in front. This means legroom is fairly tight, even for the 5”2’ half of us and no room for bags etc. I found seat 11 rather uncomfortable and to be honest would avoid on that basis alone if I were to return to this theatre.

Something to note for the current production - Due to the nature of the show, there is a huge amount of intimate, legs wide open “action” and at times at this close proximity to the stage my wife felt a little embarrassed. If a little shy, perhaps a seat a little further back may suit?

As neither of us had seen the film, the only thing we knew was the fact that it would be set in the famous ‘risqué’ nightclub - we had no preconceived ideas.

As we walked down the theatre corridor and into the auditorium we were met by a literal assault on the senses! The whole auditorium has been transformed top to bottom in to the aforementioned night club with windmills, elephants, dancers, neon and evocative music - we found it truly mesmerising and immediately began to see why the ticket prices for this are so high.

From that moment we also had high expectations about the show - we were NOT disappointed.

There really are not enough superlatives to describe this show, it is amazing. The sets, the staging, the acting, dancing and singing were all absolutely wonderful and all set to a fantastic soundtrack played at high volume by a clearly exceptional off stage band.

I won’t go into the actual plot - I don’t need to. In 30+ years of going to the theatre this was one of the most spectacular shows we have ever seen and we will DEFINITELY be popping back to the Moulin Rouge very soon.

A View From the Stalls.

Monday to Thursday "Off Peak" performances (prices run according to demand)

Friday and Saturday "Off Peak" performances

Note that cabaret table seats cannot be purchased individually, you must by the whole table of 2 or 3 tickets. Rules apply to those seated here, see the official website for details. Table seats can be purchased, first come, first served every Friday at 12 noon for the coming week's performances at www.londontheatre.co.uk.

£25 Lottery: Enter online at: https://www.moulinrougemusical.co.uk/lottery/. A draw is made each Wednesday for the following week. Winners can buy up to 2 tickets for their chosen performance the following week. If you win, you will be contacted with a link to book the actual tickets and have 72 hours to do so. Winners are contacted via email. Entrants must be over 18.