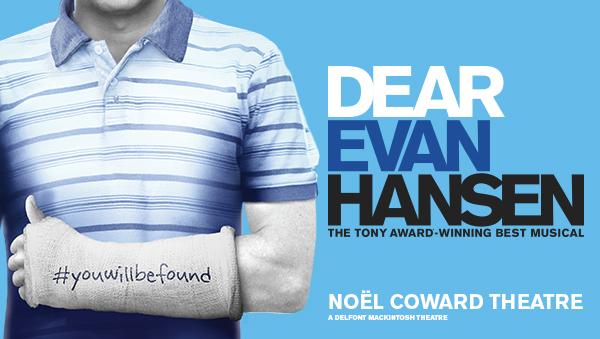 Balcony B23: Came with a warning about restricted view because of handrail - the handrail was annoying but not too much of a nuisance (and very little of the stage was lost).  If the person in row A in front of you decides to lean to their left to get around the handrail in their line of sight, this will block you.  However, the seat is very high so unless you are very tall, you will be swinging your legs (or using the step to the side as a foot rest, as I did) and/or risking kicking people in row A in the head. it’s probably more a warning to those who value their heads than people who can’t reach the ground. The balcony is very high up and steep, so not recommended if you don't like heights.

Dear Evan Hansen, Noel Coward Theatre, December 2021
Seats, Balcony, AA12-AA13
I would say for the price of £15, the seats on the whole were great value. In both seats you cannot see a chunk of the front left of the stage (if you were in AA14 upwards this would be even worse), but you can hear everything fine, and for the few bits you can't see when the action is here, it's obvious what's happening, so you don't miss out, and as long as everyone in the row leans forward, you can peer over the safety rail and see, without blocking others' views. Leg room is horrendous for anyone of any size, and we were very thankful for the interval to have a stretch. You are pinned in, and have to walk through an entire row, then an extra bit of Row A to get to the seats, so if you have a weak bladder, I'd recommend a different seat, as getting in/out is a pretty arduous and very inconvenient effort if everybody is seated! But bear this in mind and plan liquid intake wisely, and for £15, they're not to be sniffed at!
_______________________________________________________

Royal Circle, Row D, Seats 5/6/7.
In a relatively small theatre these seats do not feel as remote from the stage as in some, and, with just 8 rows in the Royal Circle the actors' features and expressions remained clearly visible.

Seat 5 was a little uncomfortable as cushioning was slightly lacking, but with a clear view (thanks to the more than adequate rake), decent legroom (5’10”) and close proximity to the main entrance I would say these are some of the best Royal Circle seats I’ve experienced.

Note : Having previously seen this show from the stalls (My go-to seating preference), I now realise that this show's viewing experience is far better from any of the circles, due to the many stage floor projections.

RUSH TICKETS: App Todaytix are offering £30 "Rush tickets," located at venue discretion, for all performances. Released for the performance on that day, first-come, first-served. Download the App from Todaytix, unlock the "Rush Ticketing" feature by sharing on Facebook or Twitter, and that will allow you to buy tickets.