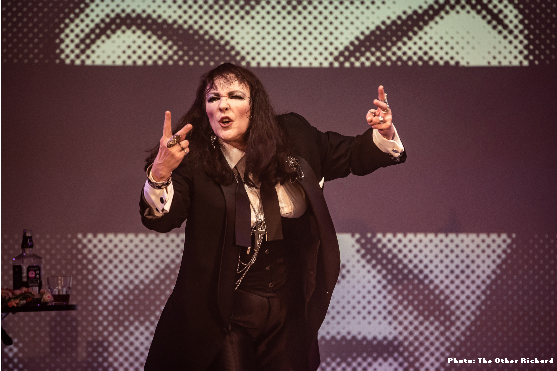 A 60-minute, one-woman show starring multi-award-winning actress Frances Barber reprising her role as Billie Trix from the 2001 musical, ‘Closer to Heaven’, ‘MUSIK’ by writer Jonathan Harvey and Pet Shop Boys Neil Tennant and Chris Lowe is to transfer immediately to London following its world premiere at the 2019 Edinburgh Fringe.

Pet Shop Boys said: “When we wrote ‘Closer to Heaven’ almost 20 years ago, we loved the compelling outrageousness of the character Bille Trix as written by Jonathan and performed by Frances Barber. We have all discussed for many years the idea of creating her own one-woman show which would give us the chance to write more songs for her as she looks back on her incredible career. We’re thrilled that this show is finally happening.”

Jonathan Harvey said: “It has been such a treat reconnecting and working with Chris and Neil on this, 20 years after our first foray into musical theatre writing. In ‘MUSIK’ Billie, dried up, drug-addled icon and rock star, tells us about her life and sings her biggest hits. I can’t wait to see Frances Barber inhabit her again as she did so hilariously and so touchingly all those years ago.”

Frances Barber (pictured above, photo: TheOtherRichard) is an award-winning star of stage, screen and TV. Her extensive credits include the films ‘Prick Up Your Ears’, ‘We Think the World of You’, ‘Dead Fish’ and ‘Film Stars Don’t Die in Liverpool’. Her numerous TV credits include ‘The Street’, multiple guest starring episodes of ‘Doctor Who’ as Madame Kovaria and ‘Silk’. In the West End she recently played Mrs. Cheveley in ‘An Ideal Husband’.

Pet Shop Boys have sold more than 50 million records worldwide and are listed as the most successful duo in UK music history by The Guinness Book of Records. Since 1985 they have achieved 42 Top 30 singles, 22 of them Top 10 hits in the UK Singles Chart, including four UK number ones and at the 2009 Brit Awards, they received an award for Outstanding Contribution to Music. They have also written a score for the classic silent film, ‘Battleship Potemkin’, a ballet, ‘The Most Incredible Thing’, and performed at the BBC Proms their musical work inspired by Alan Turing, ‘A Man From The Future’.

Jonathan Harvey is an acclaimed playwright, novelist and TV writer whose work has earned many awards. His plays include ‘Beautiful Thing’, for which he won the prestigious ‘John Whiting Award’ and ‘Babies’ (National Theatre Studio/Royal Court Theatre), winner George Devine Award and Evening Standard’s Most Promising Playwright Award. On TV he wrote the cult comedy series ‘Gimme Gimme Gimme’, starring Kathy Burke and James Dreyfus, ‘Murder Most Horrid’ and is a regular script writer on ‘Coronation Street’.

For those who remember “Closer To Heaven,” the 2001 ‘Pet Shop Boys’ musical at the Arts Theatre, London, this is a must.

In that show, faded star Billie Trix was narrator and mother confessor to the youngsters negotiating their way through the sleazy pop industry. Now, in “Musik” Billie Trix is the star, and this is her autobiography.

Opening with a bitter “Mongrel” explaining her origins behind the Iron Curtain, the song spoofs admirably “Miss Saigon.” Removing her eye-patch, Billie (Frances Barber) launches a tirade against the singer “playing the theatre next door.” Yes, Madonna stole her act, and she won’t let her forget it.

It sets the tone for the rest of the show, as she did everything first but failed to profit.

Six excellent Pet Shop Boys songs interspersed with outrageous highlights and lows of a life led to the full. A mixture of outrageous exaggeration, parodies of bygone eras and trends, there are more cultural references than any one person can follow. Don’t get one of them, don’t worry, you will almost certainly get the next.

Whisky and drug-fuelled (not heroin, hasn’t touched that since rehearsal) Barber is a tour-de-force, a full hour of indolence and indulgence during which her energy is unflagging.

The songs are growled, and both ups and downs feel genuine; a real surprise is feeling for her in the moment she absently spills her carefully prepared ‘medications’ and communicates a sense of desperation you don’t have to be an addict to understand.

Lee Newby’s set runs to a table, chair and microphone stand. Behind, a video screen with witty animations takes the strain, and is an excellent example of multi-media use to enhance and fill out the production rather than detract from it.

Particularly clever are the movie poster, “Soup” sequence (and accompanying song) and Trix’s home for 9 years in Soho Square. What a certain artist did to it isn’t repeatable, but is graphic and unsurprising, really...

The only real issue with the show is a lack of a punchy climax. In the final few minutes the energy dissipates and there isn’t any evidence of the pay-off from previously planted clues. Perhaps a professional comedy writer could shape the material a little further to that end, as Josh Seymour’s direction proves that back-referencing is a key to the show’s construction.

Still, it is a fast-moving hour, one all “Closer To Heaven,” “Pet Shop Boys” and indeed Frances Barber fans will not want to miss.