Blinded by the Light (The True Story) 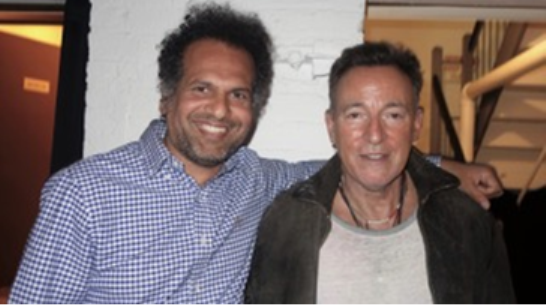 It was the feel-good movie of 2019: the unlikely story of how a Pakistani boy from Luton was inspired by the music of Bruce Springsteen. Blinded by the Light has delighted audiences around the world, and now its writer Sarfraz Manzoor will reveal the incredible true story that inspired the acclaimed film.

Adapted from his memoir Greetings From Bury Park, Blinded by the Light tells the story of Javed, a British Muslim teenager in a tumultuous, Thatcherite Britain who finds solace – and inspiration – in the unlikely form of a New Jersey working-class hero otherwise known as ‘The Boss’. The character of Javed is based on Manzoor himself, and so now he’ll be painting the full picture to audiences at Leicester Square Theatre – and taking us on an emotional, eye-opening journey from the suburbs of Bedfordshire to the bright lights of New Jersey. Don’t miss the true tale!

Sarfraz Manzoor was born in Pakistan, moved to the UK as a child and grew up in Luton. He has been a print journalist for more than two decades, and his journalism has appeared in most leading British newspapers. He has written and presented documentaries on radio and television. His memoir Greetings From Bury Park was published in 2007, and Blinded by the Light was released around the world in early 2019.

Thursday to Saturday at 7pm.