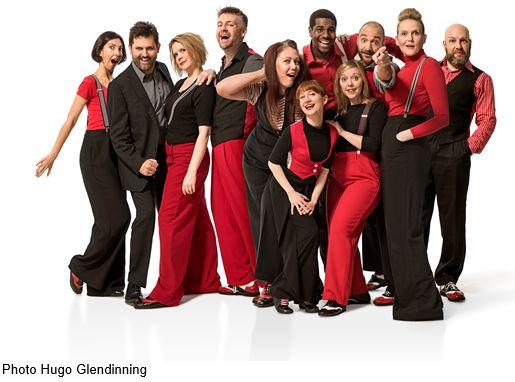 One of the last West End shows to be cancelled before lockdown in March, The Showstoppers turned their final performance at the Lyric Theatre into an impromptu online live stream event, which has since been viewed more than 112,000 times.

During lockdown The Showstoppers have been keeping their fans entertained with live streams - some of the only new musicals to be created and broadcast during this time! -  online kids shows and bespoke songs - written and recorded in 24 hours - following online challenges from global celebrities including Elaine Paige, Ramin Karimloo and Derren Brown.

Now The Showstoppers are storming back to the West End to take up a (socially distanced) residence at the Garrick Theatre.

With 12 years as an Edinburgh Festival must-see phenomenon, a critically acclaimed West End run and an Olivier Award to their name, The Showstoppers have blazed a trail in world class improvised comedy since 2008 and delighted audiences across the globe. Now, with well over 1000 performances under their belts, they’re back in a new home at the Garrick Theatre for a limited run of singular, one-night-only musical extravaganzas.

The Showstoppers transform audience suggestions - for setting, musical styles, show title and more - into an entirely different show every single night! Guaranteed to impress, they create shows packed with high drama, superb lyrics, dazzling dance routines and catchy melodies – entirely made up on the spot as the Showstopper team – cast and band – weave a brand-new musical in front of the very eyes of the audience, complete with hilarious characters, fabulous dance routines, beautiful songs, epic story lines, all sprinkled with the pizzazz of a Broadway show.

Every Showstopper! performance is a brand-new musical West End hit waiting to happen – so whether you fancy ‘Hamilton’ on Hampstead Heath or some Sondheim set in a castle, you say it and - as always - The Showstoppers will make it happen!

Showstopper! The Improvised Musical
During lockdown whilst The Showstoppers were prevented from improvising musicals together – technology isn’t yet fast enough to keep up with them across multiple locations! – the company entertained audiences by turning their talents to writing and recording songs from their homes. In the last six months they have completed five full episodes of The Showstoppers’ Online Storytime for kids, a livestreamed Alternative Eurovision Song Contest which raised over £7,000 for The Care Workers Charity and  two socially distanced livestreamed musicals which have sold over 1,200 tickets and received over 3,000 suggestions for musical theatre styles, songs and settings so far. The 24 Hour Song Challenges, Online Storytime episodes and the Alternative Eurovision Song Contest can be watched on ww.showstopperthemusical.com, the livestreamed shows can be purchased on Vimeo for a small fee.

For a full discussion, opinions, reviews, notes, tips, hints and advice on all the seats in this theatre, click on "BEST SEAT ADVICE" (on the left of your screen).

With most seats at a single price, in the stalls and dress circle, it is worth choosing to be near the front. In the stalls a few "behind pillar" seats are bottom price, and worth a look for comfort as much as view - those on rows P and Q see more than those on row H. Note that the side blocks are not cheaper, and a last choice. Prices do drop at row R, but the view isn't great as the seats are not well off-set, so fair value only if you are taller.

In the dress circle the ends of rows B and C are cheaper and about fair. Conversely the centre of A and B are "premium" and even with the free drink that comes with those seats some in B may be uncomfortable...

In the upper circle the "green" rated seats have extra legroom, which is worth thinking about even if the view isn't as good. And the price is low if you can't bag similar seats in the stalls.

Note that the £45 "premium seat" price includes a glass of house wine, beer or a soft drink. Choice of brand is at venue discretion. Alcohol cannot be served to those aged under 18. Proof of age may be required and the right to refuse service is reserved. No credit is given for items not taken.

Londontheatredirect.com charge £9 on £45, £7 on £35, £5 on £25, £3 on £15 booking fee per ticket. There is a £1 per booking, not per ticket, transaction fee for collecting tickets from the box office before your performance. Alternatively, if time allows, there is a postage to your home option, costing £2.95 (£4.95 to non-UK addresses) per booking, not per ticket. Optional Ticket Insurance is also available.