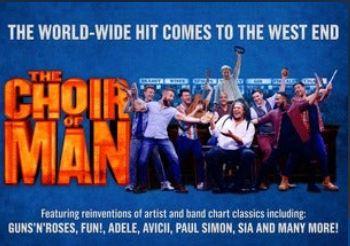 It's a pub sing-a-long like no other. 9 guys deliver the favourite songs of Paul Simon, Sia, Adele and many more in foot-stomping style with tap and thoughts on community.

A working pub on stage, it's a party lock-in like no other.

Not available. Professional reviewers are agreed that this is one of those "office party" shows, with appeal to those out as a group looking for a bit of fun.

It's a mixture of back story - each man in the pub has one - and good old-fashioned audience singing along interaction. One of those rare times in a theatre where it is not only permitted but encouraged, it seems.

What it lacks in structure and story is outweighed by the strength of the music. Though one reviewer found a urinal sequence tasteless (the monkey would probably agree) for the most part it is harmless 3 star fun in the majority opinion.

App TodayTix offer £20 "Rush tickets" for all performances. Released for the performance on that day, first-come, first-served. Download the App from Todaytix, unlock the "Rush Ticketing" feature by sharing on Facebook or Twitter, and that will allow you to buy tickets.

© 2000-2023 "Theatremonkey," "Theatermonkey," "Chip" and "Sammy" are registered trademarks. Buy your tickets with confidence here. Theatremonkey is an Affiliate Member of STAR. All rights reserved.