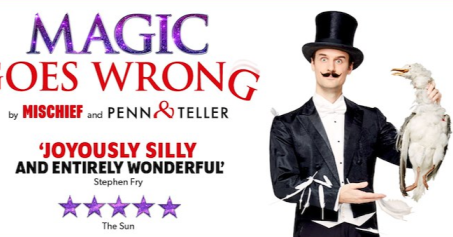 The show is cleverly presented and the magic that does to go right is great, mainly at the end! The company have produced some brilliant shows, very original and, despite my personal opinion, I think this show is still worth seeing. Best not to have any prejudgement because of the other productions. It stands alone and, for me, was just a little wobbly.
__________________________________________

As a big fan of the late, great Tommy Cooper (I had the pleasure of meeting him in a pub; a giant of a man, carrying a huge tray with around 20 drinks over his head, swerving through the crowd like a ballerina before depositing it with that trademark laugh), one of the originators of an act of magic seemingly going wrong, and a big fan of everything Mischief Theatre has put out so far, this show was either going to be fantastic or a disaster.

I’m glad to say it fell (mostly) in the first category.

Like all Mischief shows, get there early.  There are things going on around the theatre that will become part of and inform the show later on.  You can see the show without them, but they just add a little something and are fun to look out for.

The show?  It’s a magical cabaret with magician, escapologists, mind-reader and the inevitable ‘danger’ act, whose talent reflects the limited budget.  The magic is designed in collaboration with Penn & Teller - another act that has perfected the “Is it going wrong?” setup - and I understand draws largely on their own back catalogue.

The highlight for me is the “Mind Mangler” a low-talent Derren Brown (watch out for his cameo) ad-libbed joyfully by Henry Lewis.  At one stage I couldn’t draw breath as I was laughing so hard.

But the other acts are fun. Magician Sophisticato (who has inherited his Dad’s act) performs a Dove act that is essentially beautifully carried off, with one major flaw (this was one of the reasons for getting there early, a little set-up that pays off so well).  Escapologists Madame Escapade and Peg (I understand them to be the 4th best mother and daughter escape act… in Hitchin) do well with thin material (though their act is essential in setting up the final payoff).  And then there is ‘The Blade’ - a Jonathan Goodwin ‘danger’ act, who makes the (fatal?  You’ll have to see) flaw of upsetting his assistant at the start of the show, with disastrous consequences.

The final payoff?  Satisfying and clever, all the more effective for the effortless drop-in.  The final trick? I won’t say too much, but assistant Mel (Scott Hunter) tries throughout the show to perform his one trick. By the end, the audience wants him to do it SO much (well set up, Mischief) and he rewards with a sublime, beautiful little piece of magic.

Yes, the material is uneven at times.  But there were moments when I struggled to breathe from laughing so hard.  And Mischief has remembered to drop in those little asides that shine - the “traffic cones” gag is worth the cost of admission and my wife Laura was still giggling about it days later - plus knowing when to play it straight mixed in with slapstick.

Nicely central, the Apollo has a decent enough rake that means you should be able to see over all but the tallest.  Decently comfortable (barely a fidget) with good legroom and close enough to the stage to pick up finer detail but far enough back to see everything easily these are well worth the money.

Firstly, none of the stalls seats appear to be offset; we were certainly directly behind the people in the rows in front of us. This suggests that perhaps seats towards the side of the theatre, where you could be looking slightly to the left or right of the person in front, might offer a better view.

I am over 6 feet tall and had the head of the person in front of me obstructing my view.  That said, the view to the back of the stage was good.  Secondly, there is no central aisle as suggested in “Choosing seats in general”.  It appears that while two seats in the centre of each row are set-up to be removed, they are in place for the present production.  On a more subjective note, I don’t think the rake in the stalls is particularly good when compared to similar theatres. Leg room was good for me.

At £25.00 each the seats were probably reasonable but I would have been much less happy had we paid more.

Stalls G 6, 7, 8. Premium seats acquired for a bargain price (thanks TodayTix!). No issues with the rake and these are fairly central so we had a great view. As the stalls are just one solid block it does feel a bit claustrophobic as there’s not too much leg room  and seats seem quite tight. SPOILER ALERT. A note on the show itself - I didn’t realise there was some audience participation and I was grateful to be just far enough back to be out of the firing line. However, you may want to avoid the first four rows rather than risk the anxiety of being selected as a participant! SPOILER ENDS. Very funny show though, we were lucky to see Henry Lewis as The Mind Mangler - an absolute master of his art.”

200 seats - in various locations throughout the theatre - are bookable in advance for all Tuesday Evening performances, priced at £20 each at the usual theatre website www.nimaxtheatres.com.